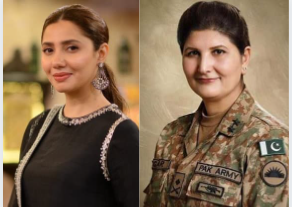 Mahira in her recent social media post shares a teaser from the biopic of Lt General Nigar Johar titled Aik Hai Nigar, who became the first and only female officer in the Pak army to reach the ranks of Lt General.

“Honoured to be able to play a woman I admire so much, Pakistan Army’s first female three-star General,” Mahira Khan said about the high-impact role.

The biopic outlines the life and career of Lieutenant General Nigar Johar and she further adds, “What a life, what a story… to know her, is to know one of the greatest we have amongst us”.

It is written by Umera Ahmed and directed by Adnan Sarwar, also starring are Bilal Ashraf in a key role alongside Khushal Khan, Sohail Sameer, and Iman Shahid.

As stated by the Inter-Services Public Relations (ISPR), Johar holds the award for becoming the first female Surgeon General of the Pakistan Army. She was also the third women officer to reach the position of major general. Her father has also served Pakistan Inter- Sevices Intelligence (ISI).