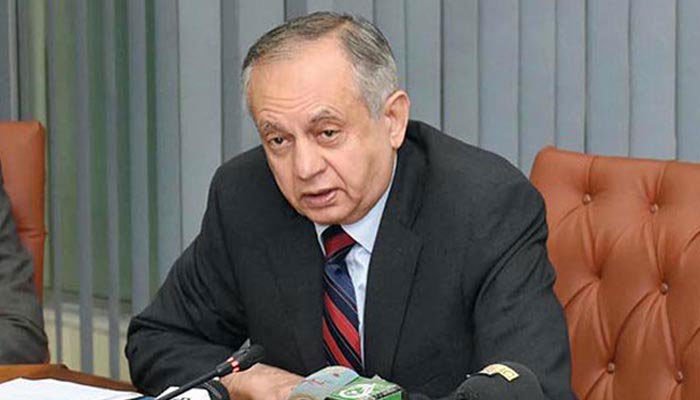 Adviser for Commerce and Investment Razaq Dawood on Sunday expressed the hope that by the last fiscal year of the current government (2023), the country’s exports would reach at $50 billion by following the policy of diversification in potential trade sectors and markets.

Export diversification, focus on non-traditional sectors and increasing exports to new markets, including the African market, would not only enhance the volume of the country’s exports, but would also help to achieve the export target, the adviser said during an interview.

‘Make in Pakistan’ is the government’s top priority trade policy, which aims to introduce Pakistan’s traditional and non-traditional export sectors and local products in the international trade market. The adviser said that now the export of mobile phones and motorcycles from Pakistan would start within the same trade policy. He said the export of these two products to the global market would usher in an era of exporting engineering products from the country. He said at present, the share of engineering goods exports in the global trade market is 51 percent.

He said that Pakistan now wanted to make a name for itself in the world in non-traditional sectors, including engineering and pharmaceuticals. He informed the recently local Karachi based electrical and electronics goods company ‘INOVI TELECOM (PVT) LIMITED has just exported the first consignment of 5,500 “Made in Pakistan” 4G mobile phones to the ‘Middle East’. Razak Dawood said that this would be the beginning of an era of high value-added exports from Pakistan.

He said that this also marks the beginning of product diversification from our traditional to nontraditional sectors.

“I urge other mobile manufacturers in Pakistan to emulate this example and aggressively export their products,” he said. The adviser said that in the recent past, when the United States, secretary of state for commerce visited Pakistan, he had identified in his trade facilitation scheme, the Generalised System of Preferences (GSP), a number of traditional trade products in which Pakistan had not yet shipped goods to the US trade market.

Most of these items came from Pakistan’s traditional commercial products, including textiles, which were now being worked on diligently. “Geographical trade diversification and search for new markets will further increase our exports,” he said.

And in this regard, the government wanted to increase exports to Europe and the United States by making its trade goods globally competitive, he added.

Replying to a question, he said that now the manufacturing of motorcycles had been started in Pakistan and with this Pakistan would start exporting up to 10,000 motorcycles which would be increased up to export of 30,000,000 motorcycles annually in the coming years.

He said that Japanese company ‘Honda’ has decided to set up its own manufacturing plant in Pakistan, which will make Pakistan a hub of motorcycle manufacturing.

They will start exporting motorcycles worth $30 million from Pakistan in coming years. Razaq Dawood said we have decided to move towards import substitution which will increase our exports and create more industries in the country.

Replying to another question, he said Pakistan’s exports touched the mark of over $25 billion over the past fiscal year 2020-21, and now the government has set an export goal of $38.7 to 40 billion for the current FY 2021-22.

He said the export goal for the previous year was $ 25.3 billion for items and $6 billion for the services sector. He also said that the country’s Information Technology (IT) exports had grown at 47 percent, which indicates that IT exports crossed the mark of $ 2 billion.