Pakistan stands with Turkey to achieve shared goal of peace 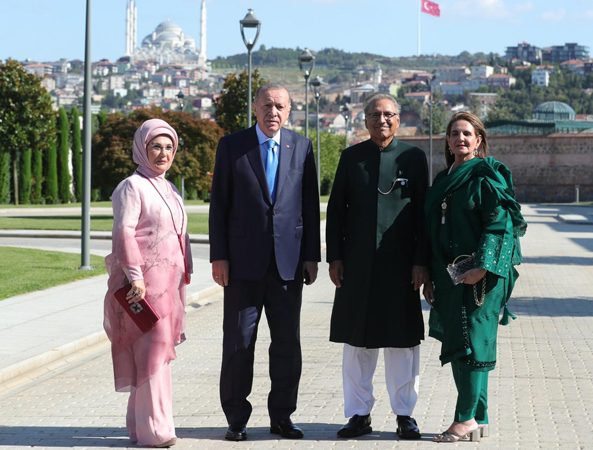 President Dr Arif Alvi Sunday said that the relationship between Pakistan and Turkey was a force for regional peace and stability with their exemplary support towards peaceful co-existence and cooperative multilateralism.

The president said the people and the government of Pakistan would continue to stand by Turkey for achievement the shared goals of peace and prosperity.

He said Pakistan and Turkey were faced by common challenges and threats and both the countries had deepened the security cooperation.

The president particularly congratulated the Turkish defence ministry for making great progress under the leadership of President Erdogan, defying all odds and challenges to change the destiny of Turkey.

He said Pakistan was one of the biggest markets of Turkish defence products.

He said the collaboration for construction of Milgem Class Corvettes would not only enhance the capability of Pakistan Navy rather it was great moment to further cement the bilateral ties.

He also appreciated the role of all stakeholders for timely achieving the major milestone despite COVID-19 challenges.

The president told the audience that in current world affairs, the morality was taking second position to vested interests, but he believed that a new world era was emerging where the morality would lead the nations. And that is where the role of Pakistan and Turkey becomes important, he remarked.

President Alvi said under the agreement, four Milgem corvettes would be constructed with first and third in Turkey and second and fourth in Pakistan.

He said the relationship between Pakistan and Turkey was not merely between the two governments rather the nations.

President Alvi said that the fake news phenomenon was not new rather it was an old issue. He said in the current world, the knowledge was not free rather it flows as per the vested interests. However, he said as per the Islamic traditions, the flow of knowledge should be free for benefit of all.

He also thanked the Turkish president for inviting him to attend the inauguration ceremony.

Later, in her remarks before launching the frigate, First Lady Samina Alvi prayed that the corvettes would bring success for Pakistan and prove to be a good omen for the country.

She hoped that the ship would carry Pakistan’s flag with dignity and success and prayed for its successful operations.

In his remarks, Turkish President Recep Tayyip Erdogan said Pakistan played a vital role in ensuring peace and stability for Afghanistan, which had recently seen an increase in conflict.

He said both the countries would make all out efforts for Afghanistan to reach stability as soon as possible.

Therefore, Turkey’s relations with Pakistan will continue,” he added.

Erdogan said the solutions to the problems in the region could only be materialized with the support of Pakistan. He said under first of the four Milgem Corvette was inaugurated for Pakistan Navy and as per agreement, two each would be constructed in Turkey and Pakistan.

He said the steel cutting ceremony had taken place in 2019 and the project would complete by 2025. He said Turkish defence ministry has been cooperating with numerous countries but Pakistan had a special place among those states.

Erdogan said both the countries would take the bilateral relations to the desired level and set an example for the world.