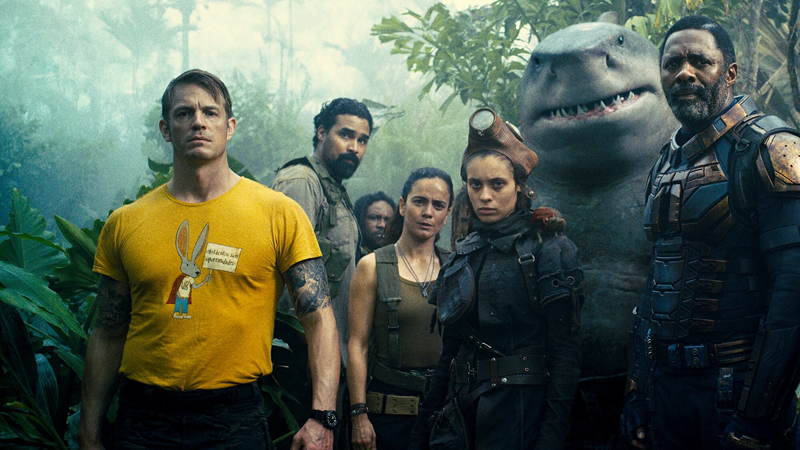 The DCEU’s latest addition to its ever-expanding cinematic universe, The Suicide Squad, is finally here. James Gunn’s first endeavor within the DC film-verse, after making his transition from a successful MCU career, is attracting a lot of attention. After making blockbuster hits like the Guardians of the Galaxy, Gunn’s soft reboot of the 2016 movie Suicide Squad has managed to please the critics and the fans alike. Gunn skillfully integrates humor into the dark and gory tone of the film, while also providing subtle nods to other famous franchises (for example, a particular scene from Hobbs and Shaw). If you haven’t watched the movie yet, you’re definitely missing out on one of the best movies from the DCEU so far.

And if you have, and you’re constantly fighting the urge to spoil the movie for others, please don’t. We have a better suggestion. Here at Collider, we have compiled a list of 15 movies like The Suicide Squad to watch while you wait for everyone else to get caught up. From classic war dramas to irrelevant superhero movies, these films are equally as dark, gory, comedic, and enjoyable as the DCEU’s latest installment.

Let’s start off the list with the movie that was the biggest inspiration for James Gunn’s The Suicide Squad. He himself confirmed it on his Twitter account. And we can clearly see what he meant.

A 1967 war film, the movie was inspired by the novel of the same name, written by E. M. Nathanson, which was itself inspired by a real-life WWII anecdote. OSS officer Major John Reisman (Lee Marvin) is tasked with training some of the Army’s worst prisoners and turning them into commandos to be sent on a virtual suicide mission, Project Amnesty. He collects 12 individuals, convicted for various crimes, known as the Dirty Dozen, and trains them to parachute across enemy lines and execute a German Personnel at a French chateau. The major reminds you of The Suicide Squad’s Rick Flag, and the funny, unhinged, and dangerous ‘dozen’ show you why Gunn chose to base his version of The Suicide Squad on this film.

If you’re an early 2000s kid, you will surely remember this movie series. It was one of those movies that could fool your parents because of its cover, as a kid-friendly superhero film, while you enjoyed the brutal fights, F-bombs, and the overall outrageous tone of the film in the privacy of your room. The story revolves around a comic book geek named Dave (Aaron Johnson) who takes up the mantle of a masked crime fighter Kick-Ass. Having no experience being a vigilante, he finds himself locking horns with some of the worst criminals in the city, though accidentally. He is joined by the more experienced father-daughter superhero duo Big Daddy (Nicolas Cage) and Hit-Girl (Chloe Grace Moretz), an obvious homage to DC’s Batman and Robin, and together they set out to bring down the mafia once and for all. Though sharing a similar dark humour and gore-filled tone of The Suicide Squad, Kick-Ass and its sequel Kick-Ass 2 stand out because of their story. The heroes are not forced by the government like the Suicide Squad, instead, they fight crime due to their own motivations, which makes the film even more interesting to watch.

Da 5 Bloods is a fictional war story and a tribute to the forgotten heroes of the Vietnam War. Directed, produced, and co-written by Spike Lee, the plot follows a group of four aging Vietnam War veterans who return to the country in search of the remains of their fallen squad leader, as well as the treasure they buried there. The movie directly references some of the black soldiers who fought bravely for their country. The film stars Delroy Lindo, Jonathan Majors, Clarke Peters, Johnny Trí Nguy?n, Norm Lewis, Isiah Whitlock Jr., Mélanie Thierry, Paul Walter Hauser, Jasper Pääkkönen, Jean Reno, and the late MCU star Chadwick Boseman. The vets don’t really trust each other, much like the villains-turned-heroes of The Suicide Squad, but they always pull through, even after losing a comrade or two. If you loved The Suicide Squad, the funny and dark interaction between the characters and the gruesome battles in Da 5 Bloods will surely match your taste.

James Gunn’s first endeavor in the superhero genre, Super was a hilarious, dark, and blood-splattered film featuring none other than The Office’s Rainn Wilson. Fans of the famous sitcom can actually see a bit of Dwight Schrute in this movie, as his dreams to become a superhero come to life, which he soon realizes is not as easy as he initially thought. Super doesn’t have the massive set-pieces that The Suicide Squad does, and it’s arguably an even darker film, but as Wilson’s character Frank, aka Crimson Bolt, sets out on his quest to rescue his wife Sarah (Liv Tyler), you can see the budding flame of Gunn’s talent for intertwining dark humor with extreme violence in superhero movies.

A movie adaptation of a Vertigo Comic book series of the same name, The Losers garnered a lot of attention due to its all-star cast, which includes Jeffrey Dean Morgan, Zoe Saldana, Chris Evans, and Idris Elba. The Losers are an elite black-ops team of United States Special Forces operatives, led by Clay (Jeffrey Dean Morgan). They are double-crossed on a search-and-destroy mission by their superior, Max (Jason Patric), who is a character similar to Amanda Waller in The Suicide Squad – ruthlessly cunning and unconcerned about collateral damage. The movie features tons of cool action scenes and timely placed humor that makes it a perfect mix of The Expendables and The Suicide Squad.

Guardians of the Galaxy

James Gunn debuted in the MCU with this amazing film, and it was an instant hit. Guardians of the Galaxy was a huge blockbuster and showed what Gunn is really capable of. It was the third highest-grossing film of 2014. The film unites a group of 5 infamous individuals from all over the galaxy, each with their own separate objective, who come together to save the universe. The film features an amazing cast including Chris Pratt, Zoe Saldana, Dave Bautista, Vin Diesel, and Bradley Cooper as the titular Guardians. The sequel Guardians of the Galaxy Vol. 2 was a huge hit as well, earning more than its predecessor. If you’re looking for a more light-hearted film to watch with your family but still hungover with The Suicide Squad blues, this movie is your go-to.

The Green Hornet is a 2021 superhero film written by Seth Rogen and Evan Goldberg. Rogen plays the titular hero and Jay Chou starred as his dependable and highly talented partner Kato. The film shows the story of a rich newspaper publisher, Britt Reid, who decides to take on the mantle of the vigilante Green Hornet to fight crime while posing as a criminal. Clearly, Britt, who is a spoiled brat, realizes he is out of his league, and his partner, Kato, always has to come to his rescue. Through their funny and dangerous adventures, they fight their way past hordes of criminals, similar to how the Suicide Squad munches through the Corto Maltese military. The Green Hornet is the perfect mix of action and comedy, and is definitely worth a watch.

If Harley Quinn was your favorite part of The Suicide Squad, you’re definitely going to want to watch Cathy Yan’s Birds of Prey. Unlike the former, most of its members are heroes instead of villains, but they’re still a wild bunch, and following up her debut in Suicide Squad, Margot Robbie’s Harley takes center stage. The film received mostly positive reviews from critics, especially Robbie’s performance as Harley Quinn and carefully intertwined humour and action, with a tinge of feminism. If you are missing Harley and her unpredictable craziness, Birds of Prey should be on your list, as she shines bright in all her psychotic glory.

The fourth movie in the Alien franchise, Alien Resurrection shifts slightly from its usual sci-fi horror theme to a more superheroic one. Directed by Jean-Pierre Jeunet and written by Joss Whedon, the movie sees Sigourney Weaver’s iconic character Ellen Ripley return to the silver screen as a cloned version of herself, after her death in Alien 3. However, she gains superhuman powers due to the intermixing of DNA with the Alien Queen who was growing inside Ripley in Alien 3 at the time of her death. The plot moves forward as Ripley takes down the alien colony with the help of a group of space bounty hunters and a synthetic Annalee Call (Winona Ryder). Though more serious in tone than The Suicide Squad, some of the death scenes are even more gruesome than the DC movie, making it a must-watch for sci-fi splatter lovers.

Another superhero-thriller starring Chris Evans, Push (2009) can be described as a combination of the X-Men and The Suicide Squad. The film revolves around a group of people born with various superhuman abilities, like the mutants from X-Men, who band together in order to take down a government agency that is using a dangerous drug to enhance their powers in hopes of creating an army of super-soldiers – aka, their own version of a Suicide Squad. Though only a moderate success at the box office, Push features some of the best CGI fight scenes and clever uses of superpowers and deserves a spot on your watchlist.

Though The Suicide Squad’s dark humor, graphic nudity, and pervasive language earned it an R-rating, it comes nowhere close to Orgazmo. If you are looking for a sexual wild ride lined with a superhero theme, this film will definitely quench your thirst. The story follows Joe Young (Trey Parker), a devout Mormon missionary who reluctantly participates in a pornographic film for an abusive director to pay for his and his fiancée’s dream wedding and home. This film is a guaranteed joyride for anyone who’s looking for a light-hearted and nonsensical thriller.

Loosely based on Bob Burden’s Flaming Carrot Comics, Mystery Men is a superhero comedy film directed by Kinka Usher. The film tells the story of a team of lesser-known superheroes with unimpressive powers who team up to save the day. It received largely positive reviews from critics, but failed to perform at the box office. The varied amusing superpowers and the crackling one-liners remind you of The Suicide Squad in more ways than one, especially its affection for forgotten and bizarre heroes, and it’s one of the few movies on this list you can watch with your family.

The Old Guard is a Netflix superhero film based on a comic book of the same name, written by Greg Rucka and directed by Gina Prince-Bythewood. Headed by Charlize Theron, the movie shows the story of a group of ancient warriors with unexplained regenerative capabilities, who have helped shaped human history over time. However, they are double-crossed by an Amanda Waller-like figure, leading them to set out on a revenge mission. Just like the Suicide Squad, the heroes here have their own differences, even leading to fights within the group. A sequel to the film is already in talks, and is a must-watch for hardcore action lovers.

Rogue One: A Star Wars Story

Looking for a film that entails both the space-faring aesthetic of Star Wars and the devil-may-care attitude of the Suicide Squad? We’ve got you covered. An immediate prequel to Star Wars: Episode IV – A New Hope, the Rogue One follows a group of rebels who band together to steal plans of the Death Star, the ultimate weapon of the Galactic Empire.