Pakistan only country in the world to defeat terrorism: Alvi 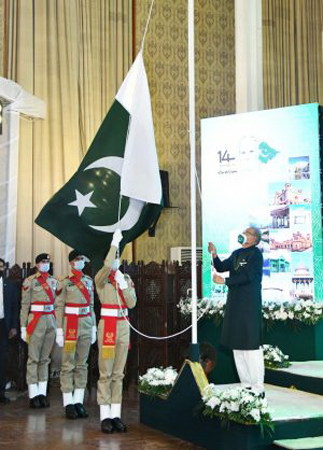 President Dr Arif Alvi Saturday said that the Pakistani nation has always overcome challenges and ordeals with unmatched sacrifices, unity and determination, adding that Pakistan can emerge as one of the most successful nations in the world on the basis of its intellectual capabilities.

Addressing a national flag hoisting ceremony here at the Aiwan-e-Sadr to mark Pakistan’s 75th Independence Day, the president said that owing to the string of successes achieved by the nation on different occasions, its future course is very bright and promising. “Our past, present and future will set course for the destination ahead,” he added.

The president said after the war in Afghanistan, Pakistan faced the menace of terrorism but the nation successfully overcame this challenge. He said that Pakistan is the only country in the world that has defeated terrorism. Paying rich tributes to the sacrifices of the law enforcement agencies and security personnel and the nation, he said approximately 100,000 human lives were lost in this war with 150$ billion losses to the country’s economy. Pakistan hosted about 3.5 million Afghan refugees on its soil for decades, he said, adding that though different countries, proclaiming themselves as human rights champions, are not willing to accept the refugees and let them drown.

The president, felicitating the nation on the Independence Day, said that Pakistan was created after huge sacrifices and the untiring endeavours of the dynamic leadership of Pakistan Movement led by Quaid-e-Azam.

Dilating upon the various significant historic moments in the history of Pakistan, he said in the past, three wars were imposed upon the country. India conducted nuclear tests during 1974, but within a few years, Pakistan also developed the nuclear deterrent on the basis of its intellectual capabilities, he added. He mentioned that Pakistan was also becoming an industrial country and a hub of information and technology after meeting its agricultural requirements. “Whether it was the earthquake during 2005, floods of 2010 or COVID-19 pandemic, the nation proved its mettle. Pakistan is transforming itself into a digital country with a thriving knowledge-based economy,” he added.

The president advised the nation not to hark to the negative elements or pay heed to fake news churned out by the enemies of the state, as its course was rightly set. He said the incumbent government’s endeavours for the achievement of basic principles of Riasat-e-Madina were based upon social justice, provision of health and education facilities, shelter and eradication of poverty.