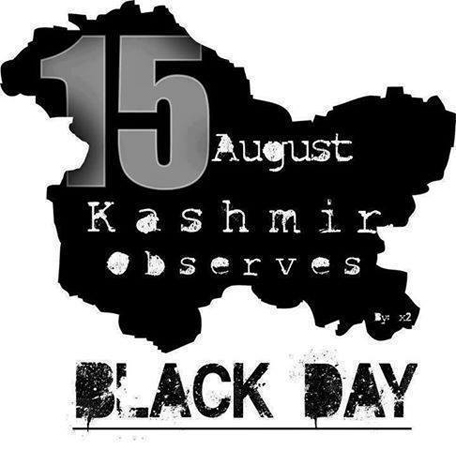 Kashmiris on both sides of the Line of Control and the world over will observe the Indian Independence Day today as Black Day to convey the message to the international community that India continues to deny them their inalienable right to self-determination.

According to Kashmir Media Service, the day will be marked with a complete shutdown and civil curfew in IIOJK call for which has been given by the All Parties Hurriyat Conference and the Hurriyat forum led by Mirwaiz Umar Farooq and supported by almost all Hurriyat leaders and organizations. The Kashmiris across the world will hold anti-India demonstration in from of Indian embassies to draw the world attention towards the Indian brutalities in the occupied territory.

The shutdown in IIOJK will be part of Ashra-e-Muzahamat (10-Day Resistance) being observed on the call of the APHC from August 05 to August 15, 2021. Black flags will be hoisted everywhere while protest rallies will be organised against the gross human rights violations being perpetrated by Indian troops in the occupied territory. Hurriyat leaders and organizations in their statements have said India has no right to celebrate its Independence Day in IIOJK as it is holding the occupied territory against the will of the people of the territory.

Meanwhile, the occupation authorities have converted the Kashmir valley, particularly Srinagar, into a military garrison and a big concentration camp by deploying Indian troops and police personnel in every nook and corner. All roads leading to a cricket stadium at Sonawar in Srinagar have been sealed. Indian forces’ personnel are resorting to technical surveillance including the use of drones to monitor the movement of the people. The troops and police personnel are searching vehicles randomly and checking and frisking people at several places across the valley, especially around the venues of the August 15 functions. On the other hand, The J&K admin has ordered all govt employees to attend the India’s Independence Day on Aug 15, 2021. Indian forces have conveyed a warning to the father of martyred youth leader Burhan Muzaffar Wani, who is a school principle, that if he did not unfurl Indian flag on the India’s Independence Day, he along with fellow teachers would lose the job.