* Gilani laments that for the first time, there is a serious conflict between people, nature and planets 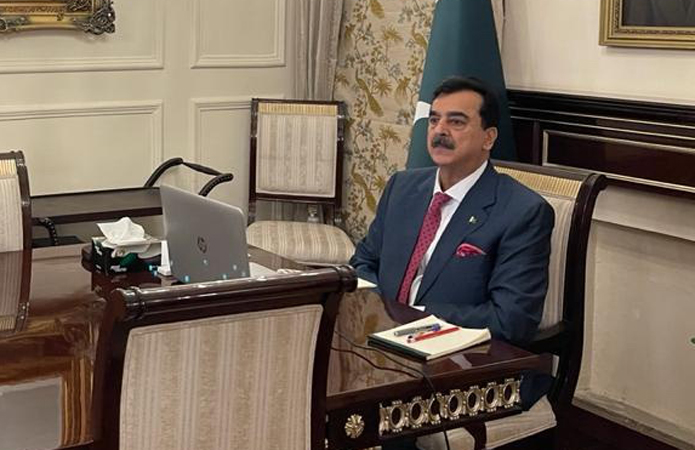 Former prime minister and Leader of the Opposition in Senate Syed Yousaf Raza Gilani has said that youth is a unique resource which can develop innovative solutions for peace and development.

In his inaugural speech, Gilani congratulated the great efforts of the WYSPO and International Human Rights Commission Team in making it possible in the unusual time of human history amid pandemic.

In the conference, topics of promoting youth in peace-building, climate change, peace and strengthening the democracies were debated.

Syed Yousaf Raza Gilani said that 46 percent of the world’s population is under the age of 25, which is the highest in the human history. He lamented that for the first time, there is a serious conflict between people, nature and planets. He grieved that a lot of people today are dramatically dying and suffering because of the impacts of climate change.

While addressing the gathering, Syed Yousaf Raza Gilani highlighted that “our generation is accountable for failing to preserve both planet and justice in the world.” He emphasized that the time has come to invest in young people, to promote dialogue and understanding across cultures and generation, to stand up for human rights “whenever and wherever we can, to empower those who are vulnerable and not fully empowered to speak for themselves”. “If we fail to make these investments now, we will further entrench poverty and ignorance for generations to come,” he forewarned.

“We have the largest youth generation in human history. Our world is home to more than 1.8 Billion people between the ages of 10 and 24 and almost 9 out of 10 of them live in developing countries and many challenges are facing us,” Syed Yousaf Raza Gilani said, adding that these challenges are not insurmountable. He reiterated that investing in young people’s education, health and employment will ensure better prospects for their own lives and for their countries development.

“We must use justice and human rights as our foundation; we must promote and protect the human rights of all young people, especially the most vulnerable,” Gilani underscored. He pointed out that highest proportion of young people is in Africa, Latin America and the Asia, which are the most unstable places on Earth. He stressed that countries may tailor public policies that address the situation and reality of youth, whether they are rural, urban, indigenous, male, female, living with a disability, or affected by drugs or conflict.

While speaking on the human rights, Gilani underscored that peace is a political decision and “we are to use dialogues as weapons and compromises as ammunitions, which is the essence of this plat form.” He commented that for this to happen, governments, United Nations agencies, non-governmental organizations need to enter a meaningful partnership with the young people.

Gilani concluded his speech by inviting the young generation for leadership and advised them to use new technology to network, create and speak out for change for an equitable, fairer, prosperous and climate-friendly world.