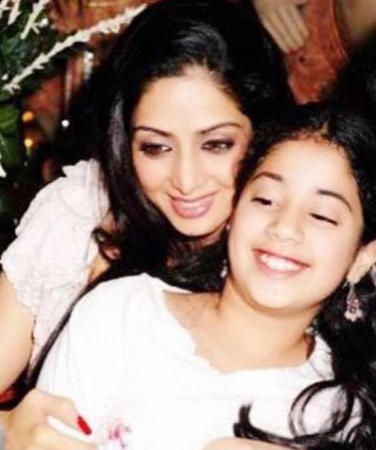 New Delhi: On late legend Sridevi’s 58th birth anniversary, her daughters Janhvi Kapoor and Khushi Kapoor took to Instagram to share posts remembering their mother. Jahnvi shared an adorable throwback picture of her and her late mother. In the picture, we see a young Janhvi smiling as she poses with a radiant Sridevi. In the caption, Janhvi expressed how much she misses her mother and how everything she does is a tribute to her mother.

She wrote, “Happy birthday Mumma. I miss you. Everything is for you, always, every day. I love you.”

On the other hand, Khushi took to Instagram stories to share an unseen picture of Sridevi and Boney Kapoor with their backs to the camera. As a caption, she wrote, “Miss you every day”.

Fashion designer Manish Malhotra also took to Instagram to share a sweet post with Sridevi in which the two are seen posing together. In the second picture, Sridevi is seen giving Manish a kiss on his cheek.

Sridevi, the first female superstar of Indian cinema, was found dead at a Dubai hotel in a bathtub. February 24, 2018, saw an ocean of fan following struck with profound grief of losing a dazzling star, who was an icon across generations. Her mysterious death which reports confirmed due to accidental drowning broke a million hearts with family, friends and fan mourning her demise.

On the work front, Janhvi Kapoor will be next seen in Karan Johar’s production ‘Dostana 2’ and Aanand L Rai’s ‘Good Luck Jerry’.

The ‘Dhadak’ actress was last seen in horror-comedy ‘Roohi’ alongside Rajkummar Rao.