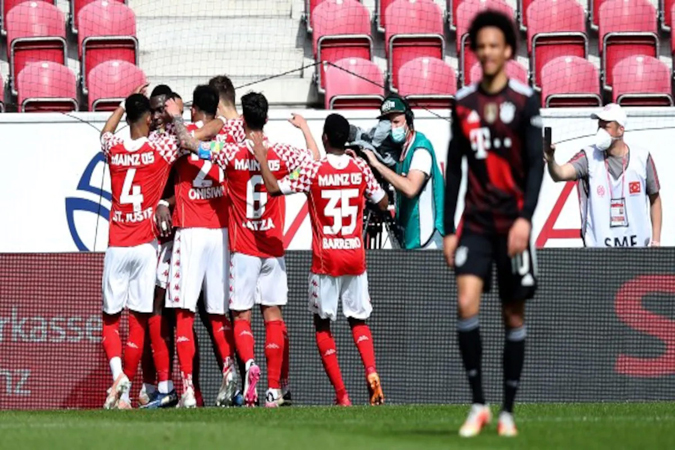 An outbreak of Covid-19 in the Mainz squad has cast a cloud on the eve of the new Bundesliga season, with Germany’s professional footballers urged to get vaccinated. The 2021/22 season kicks-off Friday when Moenchengladbach host defending champions Bayern Munich, who are seeking a tenth straight German league title.

Most football stadiums in Germany’s top-flight this weekend will be around one-third full as clubs welcome back restricted numbers of fans.

Supporters must prove they are fully vaccinated or show a negative test result.

Some clubs, like FC Cologne, are even offering vaccinations for their supporters.

However, an outbreak of the coronavirus at Mainz has disrupted their plans ahead of Sunday’s game against last season’s runners-up RB Leipzig.

Three players and a club employee have tested positive for Covid-19, while a further eight members of the squad are in quarantine to contain the spread.

Of the four who tested positive, two have been fully vaccinated.

Sunday’s match is set to go ahead, but Mainz coach Bo Svensson may have to use reserve players as, under league rules, a match can only be postponed if fewer than 16 players are available.

The German Football League (DFL) has not made vaccinations compulsory for players and club staff, but the outbreak in Mainz has sparked warnings.

“Of course, this offers a certain protection. But the players know that this is a sensitive issue.

“You can see that now in Mainz.”

Nagelsmann says that within the Bayern squad and coaching team, there is a “very good vaccination rate, better than the current one in our society”.

Around 52.3 million people in Germany — or 63 percent of the population — have so far received at least one dose of the vaccine.