Taliban clarifies for not negotiating till Ashraf Ghani is president: PM Imran Khan 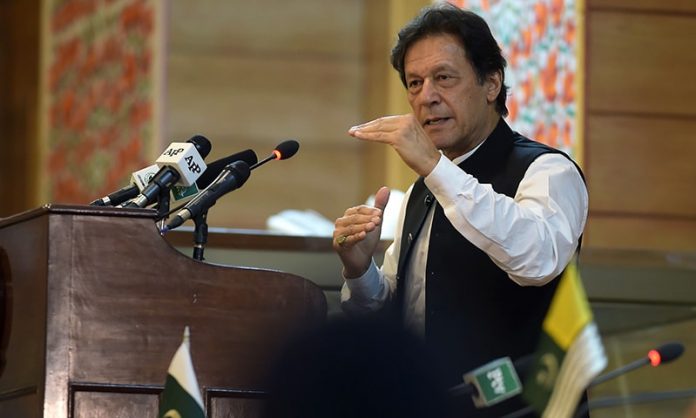 ISLAMABAD: Prime Minister Imran Khan Wednesday said that the Afghan Taliban had said they will not negotiate with Kabul until Ashraf Ghani remains the president.

The premier was speaking to foreign journalists, recalling his meeting with a Taliban delegation that arrived in Pakistan three to four months ago.  PM Imran Khan said he had then tried to persuade the Taliban for peace. He admitted that a political settlement was looking difficult under the current circumstances.

“The condition is that as long as Ashraf Ghani is there, we (Taliban) are not going to talk to the Afghan government,” Khan said, adding that this is what the Taliban delegation told him.  The prime minister said felt that the Afghan government was now trying to ensure the US government intervenes on its behalf.  “They’ve been here for 20 years… what will they do now that they did not do for 20 years?” he asked.

Khan said Pakistan had “made it very clear” that it does not want any American military bases on its soil after US forces exit Afghanistan. On Pakistan-US relations, the prime minister told foreign journalists that Washington has chosen India as its strategic partner in the region, hence it was treating Pakistan differently.

“The US thinks Pakistan should clean up its mess in Afghanistan that spanned over 20 years,” he said.  ‘Taliban could take Kabul in 90 days’

Meanwhile, a US defence official, citing intelligence sources has said that Taliban fighters could isolate Afghanistan’s capital in 30 days and possibly take control of it in 90. The official, speaking to Reuters on condition of anonymity, said the new assessment of how long Kabul could stand was a result of the Taliban’s rapid gains as US-led foreign forces leave.

“But this is not a foregone conclusion,” the official added, saying that the Afghan security forces could reverse the momentum by putting up more resistance. The Taliban now control 65% of Afghanistan and have taken or warn of taking over 11 provincial capitals, a senior EU official said on Tuesday. Faizabad, in the northeastern province of Badakhshan, on Wednesday became the eighth provincial capital to be taken over by the Taliban.

All gateways to Kabul, which lies in a valley surrounded by mountains, were choked with civilians entering the city and fleeing the ongoing fight between the Afghan forces and the Taliban soldiers, a Western security source there told Reuters. Foreign countries are trying to ensure their staff leave Kabul quickly, five foreign security officials told the news agency. One said international airlines were also being asked to evacuate staff.

President Ashraf Ghani flew to Mazar-i-Sharif to rally old warlords to the defence of the biggest city in the north as Taliban forces closed in. Jawad Mujadidi, a provincial council member from Badakhshan, said the Taliban had laid siege to Faizabad before launching an offensive on Tuesday.

“With the fall of Faizabad, the whole of the northeast has come under Taliban control,” Mujadidi said. The Taliban want to defeat the US-backed government and reimpose their rule. The speed of their advance has shocked the government and its allies.