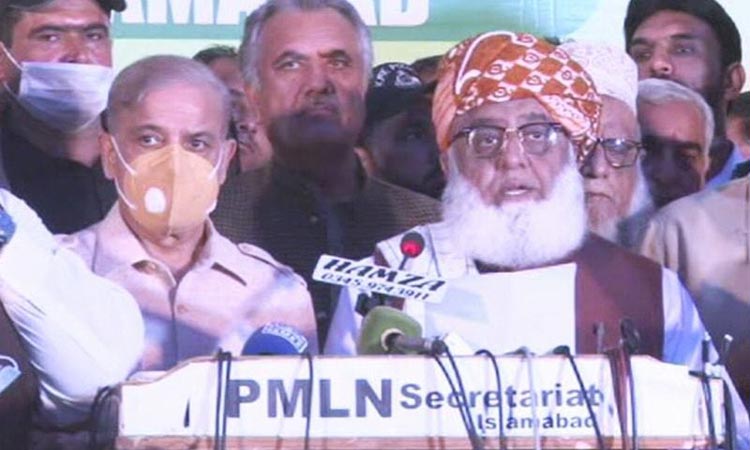 Talking to the media in Islamabad after the PDM’s first high-level meeting since May, Fazl said the opposition alliance has decided to focus ‘all its attention and energies’ on ensuring that transparent elections are held in the country.

Fazl said the participants of the meeting analysed in detail the overall situation in the country as well as internal and foreign matters. He said the participants were of a unanimous view that the country faces severe internal and external threats, while the incumbent government has ‘completely failed’ in combatting the prevailing threats. “Pakistan is facing isolation due to the current regime’s policies,” he said, slamming the government for its ‘failed’ foreign policy, as Pakistan was not allowed to present its case during the UNSC meeting on Afghanistan. “PDM believes the only way forward in Afghanistan is through an inclusive political solution; Pakistan aspires for a political and stable Afghanistan,” he added.

The PDM meeting ‘condemned in the strongest words the worst inflation in the country, he said, adding that the PTI government had “broken records of inflation, unemployment and oppression”. “The lives of the public have been made impossible. The last drop of blood is being drained from the people for oppressive taxes and fulfilling the conditions of the IMF (International Monetary Fund).”

To deal with the situation, the PDM’s steering committee will meet in Islamabad on August 21 after the parties in the alliance discuss the recommendations made during today’s meeting so they can be given a “practical shape”, Fazl said. The PDM leadership will then hold a meeting on Aug 28 in Karachi to discuss the recommendations agreed upon by the steering committee and make decisions. “A splendid and unparalleled rally organised by PDM will be held on Aug 29 in Karachi,” he announced.