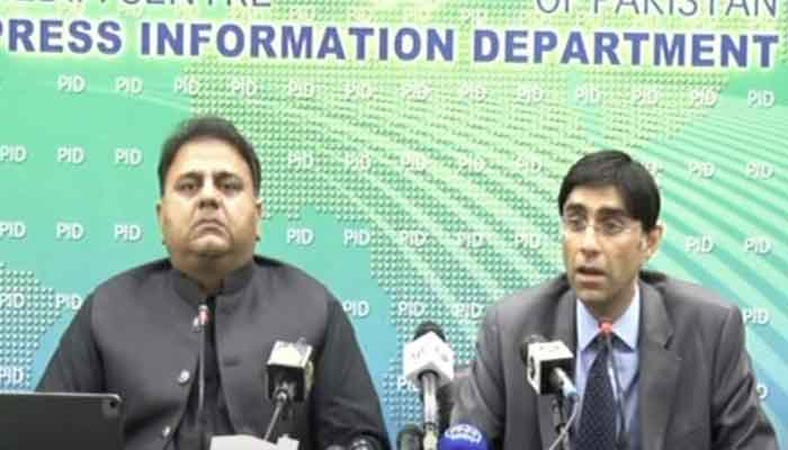 Addressing a news conference flanked by National Security Advisor Dr MoeedYusuf, he said an organized hybrid media warfare had been initiated against Pakistan. Some 845 fake websites were spreading disinformation against Pakistan and the campaign is spearheaded by Indian news agency ANI, he added.

Certain foreign elements were involved in fanning hatred and violence in the country, he said, adding that the campaign involving Afghanistan, Israel also mainly aimed at triggering communal hatred and linguistic conflicts, violence in Pakistan and all this was being supported by some foreign countries.

India used its vast network for websites to give credence to fake news based trends by Pashtoon Tahaffuz Movement (PTM) and Baloch Separatists. Some of the Indian trends were # State KilledKarimaBaloch; #StateKiledUsmanKakar and # RapistArmyBalochistan. While Israeli attempts were SAPM Zulfi Bukhari Visit to Israel. PTM got support from India.

He said Indian TV channels recently uploaded multi hour videos propagating that Pakistan was not safe for women by quoting Noor Mukkaadam case. Ironically the murderer of Noor had already been arrested, he added. He said the Digital Data Wing of the Ministry of Information and Broadcasting had prepared a two years detailed analytical report from June 2019 to August 2021, in which it has elaborated how the social media was being used against Pakistan. Unfortunately majority of the social media trends were led by India by using people from within the country. Pashtun Tahaffuz Movement (PTM) had harnessed over 150 anti-state social media trends. A total of 3.7 million tweets were against Pakistan. Anti-state trends for over 1,000 hours by PTM – majority of these tweets supported Baloch separatists.

On August 14, 2020, some 150,000 anti-state trends against Pakistan were tweeted from India on #Balochistansolidarityday – the target of some 145,000 tweets were from Pakistan. The target was Pakistan Army.

Senator Usman Kakar died due of brain hemorrhage but India spread dis-informative trends on social media stating that #StateKillsUsman. Over 2,000 tweets were from social media accounts from India. Media wings of PML-N and JUI-F participated in the campaign to spread confusion.

A social media campaign was launched with over 10,000 tweets stating that former Special Assistant to Prime Minister Zulfi Bukhari had visited Israel with #ZulfiBukhari’s visit to Israel. Unfortunately the social media wings of Pakistan Muslim League Nawaz (PML-N) and Jamiat Ulema-e-Islam-Fazl (JUI-F) also intentionally or unintentionally played their role in spreading the Israeli trend. Another trend titled #RejectKillPolicy was launched propagating that Asad Khan Achakzai of ANP but ironically Asad was killed in a dacoity attempt. Surprisingly the tweets of Tehreek-e-Labbaik Pakistan were supported by 400,000 tweets from India. The Indian contribution in another trend #ExposeProQadiyani Minister was over 122,000 tweets.

Responding to a question, he said the anti-social elements mostly used social media tools for a vicious propaganda campaign against Pakistan. To another question, he said Pakistan was not hurling accusations but exposing Indian propaganda with authentic data and analysis that, what was going on. The internal element must not become part of the anti-state media campaign, he added.

Dr Moeed said Pakistan had presented a dossier to highlight India’s clandestine strides to damage Pakistan’s interest. The world, however, turned a blind eye on Indian terrorist activities against Pakistan as the dossier was sent to the states all over the world and the comity of nations expressed lull over it. He said Pakistan was meticulously focusing the situation in Afghanistan and the think tanks under the National Security Division had worked tremendously to unearth the propaganda campaign on Twitter.