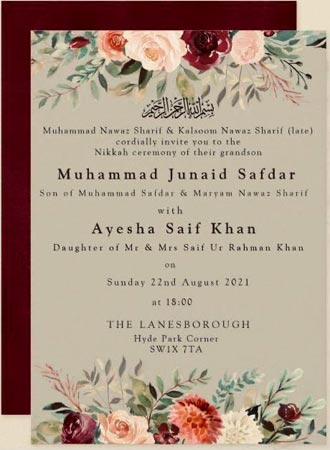 PML-N Vice President Maryam Nawaz Wednesday shared the wedding invite of her son Junaid Safdar on Twitter, which surprisingly mentions late Kulsoom Nawaz as one of the ‘hosts’ of the ceremony.

“Muhammad Nawaz Sharif & Kulsoom Nawaz Sharif (late) cordially invite you to the Nikkah ceremony of their grandson Muhammad Junaid Safdar son of Muhammad Safdar and Maryam Nawaz Sharif with Ayesha Saif Khan, daughter of Mr & Mrs Saif ur Rehman Khan,” the invite shared by the PML-N leader read, leaving many in disbelief as to how Kulsoom Nawaz, who passed away back in 2018, could be mentioned in the list of hosts of the wedding ceremony.

One of the invitees, who wished to remain anonymous, said the name of late Kulsoom Nawaz would have been added to the list of hosts out of love and affiliation, but still it is ‘height of stupidity that a dead person has been mentioned as host of a wedding event’.

While sharing the invite, Maryam Nawaz said she “will not make any request” to the government to seek permission to travel abroad on the occasion. “Unfortunately, I will not be able to attend the ceremony owing to blatant victimisation, bogus cases and my name on ECL (Exit Control List),” Maryam wrote. In a second tweet, she recalled that she was in jail when her mother Kalsoom Nawaz passed away due to cancer. “And now I won’t be able to share my son’s happiness, but, I will NOT make any request to this government for travel abroad,” she said. “I leave the matter to Almighty Allah.”

Daily Times had on Wednesday reported that the son of Maryam Nawaz, Junaid Safdar, was getting married to the daughter of Saif ur Rehman, who served as chairman of the Ehtisab Bureau (1997-99) during the second term of Prime Minister Nawaz Sharif, in London on August 22. It was also reported that owing to her compulsions, Maryam will host a reception for friends and family in Lahore while her father, PML-N supreme leader Nawaz Sharif, will preside over the festivities in the UK.