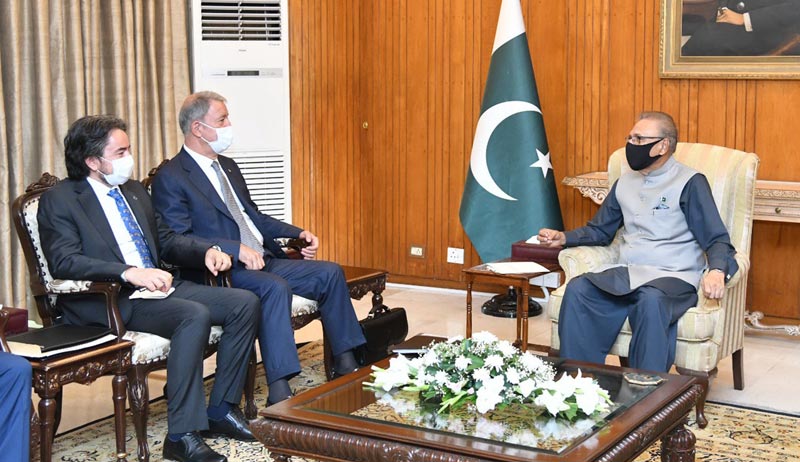 Pakistan and Turkey on Wednesday expressed intent to expand bilateral cooperation in all areas of mutual interest, particularly defence and emphasized on joint efforts to overcome the challenges faced by the Islamic world.

This was discussed in a meeting between President Dr Arif Alvi and the visiting Turkish Defence Minister General (R) Hulusi Akar, here at the Aiwan-e-Sadr.

President Alvi said Pakistan attached great importance to its ties with Turkey as both countries enjoyed a long history of fraternal relations based on common faith, values and mutual trust.

The president expressed confidence that the signing of agreement on military training cooperation between Pakistan and Turkey during the visit of President Recep Tayyip Erdogan to Pakistan in February 2020 would further strength defence cooperation.

He reiterated Pakistan’s continued support to Turkey on the issue of Cyprus.

On Afghanistan, the president said Pakistan was making sincere efforts to promote peace and stability in Afghanistan. He also highlighted the human rights violations being committed by India against the Muslim population of the Indian Illegally Occupied Jammu & Kashmir (IIOJK). The meeting also underlined the need for unity among the Muslim countries to address the challenge of animosity against Islam.

In a meeting with Turkish Defence Minister Hulusi Akar, the prime minister said Pakistan and Turkey were tied with historic fraternal ties, marked by “unique trust and support”.

He expressed satisfaction over the existing level of bilateral defence cooperation.

He thanked Turkey for expressing strong and consistent support to Pakistan on all issues, particularly the Jammu and Kashmir dispute.

On regional issues, Prime Minister Imran Khan shared Pakistan’s perspective on the Afghan peace process. Underlining that a negotiated political settlement was the only way forward, the he hoped that the Afghan leaders would recognize the importance of international convergence on the way forward and achieve an inclusive, broad-based and comprehensive political settlement.

Pakistan will continue to make every effort to help advance the Afghan peace process and to realize a political solution, he added.

The Turkish Defence Minister conveyed warm greetings from President Erdogan and reiterated Turkey’s support to Pakistan on all issues, including Jammu and Kashmir.

He concurred with Prime Minister Imran Khan on enhancing cooperation in all areas to the mutual benefit of both the countries, including the defence sector.

He also underlined Turkey’s efforts to promote a political solution in Afghanistan.

Hulusi Akar is visiting Islamabad as part of frequent high-level exchanges between Pakistan and Turkey for consultations on important bilateral and regional issues.