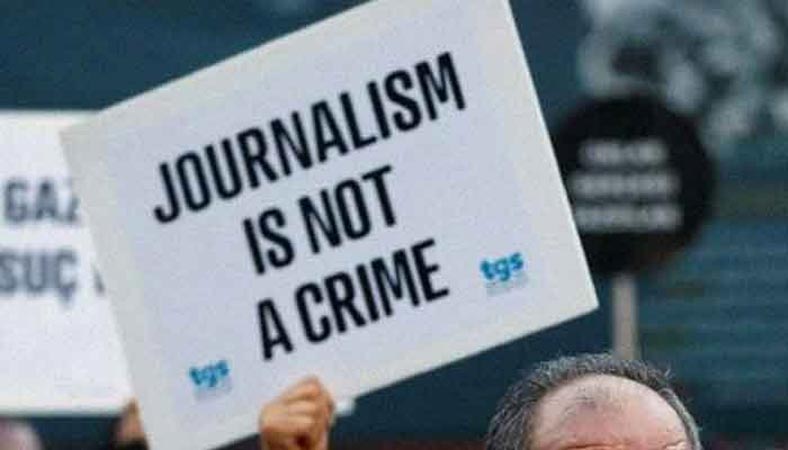 The representatives of media organizations have rejected the proposed Pakistan Media Development Authority (PMDA), terming it unconstitutional and draconian law aimed at curbing the freedom of press.

Different media organizations including All Pakistan Newspapers Society (APNS), Council of Pakistan Newspapers Editors (CPNE), Pakistan Broadcasters Association (PBA), Pakistan Federal Union of Journalists (PFUJ) and Association of Electronic Media Editors and News Directors (AEMEND) released a joint press statement on Wednesday in which they rejected the proposed Pakistan Media Development Authority and termed the concept as an unconstitutional and draconian law against the freedom of press and an expression and step towards imposing the state control to regulate all segments of media under over-centralized body.

The representatives of the media organizations vehemently objected to the proposed PMDA as it appears to be aimed at subjugating the freedom of press and expression. According to the statement, the major stakeholders believe that the PDMA is an attempt to tighten the Federal Government control over the media from one platform and ignores the fact that print, electronic and social media are separate entities, each with their own defined features. The move to bring them under state control smacks of an authoritarian streak that should have no place in a democratically-elected dispensation. The representatives of the media organizations have proposed calling a joint session of the Senate and the National Assembly to reject the proposal.

Meanwhile, Federal Minister for Information and Broadcasting Chaudhry Fawad Hussain said on Wednesday that all existing laws related to media regulation were being repealed and new legislation was being enacted in consultation with stakeholders.

The establishment of Pakistan Media Development Authority would solve the problems of media workers, he said while briefing the Standing Committees of the Senate and National Assembly on Information and Broadcasting on the key features of the draft law of PMDA. He said media regulatory authorities of four countries had been studied for setting up the new authority.

The minister said that the government wanted to reach a consensus on the draft law of the authority and consultation process had been started with stakeholders, adding that PMDA would focus on development, innovation, digital economy, training and research.

Fawad said that at present seven regulatory bodies were regulating media including PEMRA, Press Council of Pakistan, Pakistan Telecom Authority, Central Board of Films Censors, Press Registrar’s Office, Audit Bureau of Circulation and Implementation Tribunal for Newspaper Employees. He said that at present digital media platforms were not under any regulatory framework. He said that in modern times, television, radio and newspapers had become part of mobile phones and they needed a single and converged regulatory authority.

The minister said that it was important to regulate electronic, print, digital and emerging media platforms through PMDA. He said that under the present mechanism of regulation, there were more than half a dozen outdated laws which do not meet the requirements of modern times.

The minister said that under the present system, it took a long time to resolve public grievances and time was wasted in applications for registration and permission of NOCs for launch of a new platform. He said that the proposed framework would address the challenges and requirements of the convergent media environment in line with global practices to make Pakistan a major global hub for multimedia information and content services.

Chaudhry Fawad Hussain said that PMDA would be an institution that would encourage all stakeholders to serve the public interest. He said that unlike the existing system of policing and revenue collection, the new authority would focus on development, innovation, digital economy, training and research.

The minister said that the establishment of a new authority would also eliminate paperwork and facilitate the business environment. The process of transparency would be ensured by simplifying the rules and procedures, he added. He informed the meeting that there were 114 satellite television channels operating in Pakistan out of which 31 were news and current affairs channels. He said that 42 were entertainment, 23 were regional language channels while two out of seven education channels were working. Similarly, only one of the three sports channels was working, he added.

He said that landing rights were granted to 42 foreign TV channels, out of which 5 were news and current affairs channels and 14 were children’s channels. Chaudhry Fawad Hussain said that the number of FM radios was 258 out of which 196 were commercial and 62 were non-commercial. He said that the number of cable TV operators in Pakistan was 4026, IPTV channels were 12 and mobile TV channels were 6. The total number of print media approved by ABC in Pakistan was 1672 out of which 1192 were daily, 203 weekly, 28 fortnightly, 389 news agencies and 134 print and press. The minister said that he wanted to convene an informal meeting of the committee members to reach a consensus on the draft of the Pakistan Media Development Authority.

The minister said that consultation process had been started with the stakeholders. A committee headed by Minister of State for Information and Broadcasting Farrukh Habib has been constituted and has held meetings with officials of APNS, CPNE, PBA and PFUJ and Press Clubs. He said there were some reservations on the part of media owners regarding the formation of media tribunals and fines.