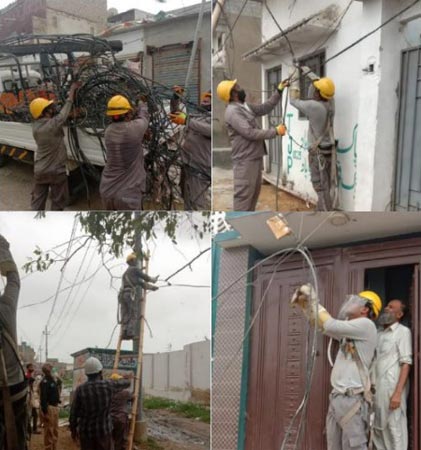 Pursuant to the uninterrupted provision of safe and reliable electric power to its valuable customers, K-Electric continues its efforts against illegal encroachments and the kunda network across Karachi. In this regard, KE teams successfully dismantled kunda-related encroachments in 6 locations in Korangi with the help of law enforcement agencies.

Around 350 illegal and unsafe connections from the KE network were being used to acquire electricity for both residential and commercial premises around Roomi School, Ibrahim Hyderi, Ali Akber Shah Goth, Sector 51C, and allied Coastal Belt which were then removed. Similarly, during another raid in Korangi’s vicinity, hazardous streetlight switches were also disconnected and removed from KE infrastructure.

The losses in those areas have now reached 50% along with outstanding dues which have now soared to PKR 1.4 billion. During the crackdown, KE teams faced aggressive resistance from the area residents but teams remained committed. Residents have been urged by KE to refrain from such unsafe and criminal malpractices and shift to legal and safe metered connections instead. KE has also notified that more raids are expected over the coming days.