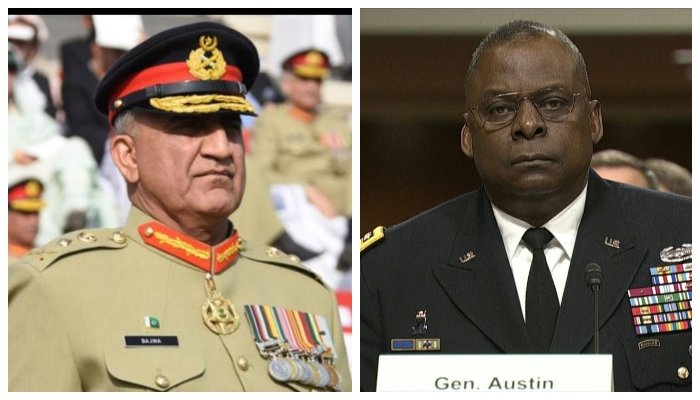 US Secretary of Defence Lloyd Austin Wednesday spoke to Pakistan Army chief General Qamar Javed Bajwa to discuss the two countries’ mutual goals of security in the region.  Austin’s call to the Pakistan Army chief comes in the backdrop of lightening gains made by the Taliban in Afghanistan, where they have managed to capture more than six provincial capitals in the last week.

“During the call, Secretary Austin expressed his interest in continuing to improve the U.S. – Pakistan relationship and build upon our multiple shared interests in the region,” read a handout issued by the US Department of Defence.  “Secretary Austin and General Bajwa discussed the ongoing situation in Afghanistan, regional security and stability, and the bilateral defence relationship more broadly,” it added.

Talks continue with Pakistan over safe havens for terrorists: Pentagon

A day earlier, the Pentagon had said that the US was having a dialogue with Pakistan over the alleged presence of safe havens for terrorists at the Pak-Afghan border, which it said were the sources of instability and insecurity in the region.

Speaking to media on Monday, Pentagon Spokesperson John Kirby had stressed on the neighbours of Afghanistan to refrain from actions that jeopardise regional security. He had said dialogue was underway with Pakistan on safe havens for militants at the Pak-Afghan border, adding: “Pakistan has also been a major victim of terrorism”.

“So, we’re all — we all have a shared sense of — of the importance of closing down those safe havens and — and not allowing them to be used by the Taliban or other terrorist networks to sow discord. And again, we’re having that conversation with the Pakistanis all the time,” Kirby had said in response to a question. Expressing the resolve to continue Washington’s support to the Afghan government, the Pentagon spokesperson had said the US will continue to provide aerial support to the Afghan Air Force whenever it is needed.