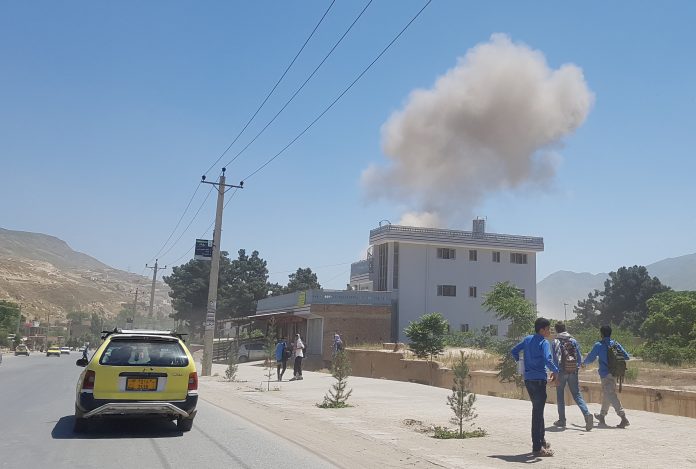 Faizabad was the eighth provincial capital to fall to the insurgents in six days as U.S.-led foreign forces complete their withdrawal.

According to Reuters The Taliban capture of Faizabad, capital of the northeastern province of Badakhshan, came as President Ashraf Ghani landed in Mazar-i-Sharif to rally its defenders as Taliban forces closed in on the biggest city in the north.

Meanwhile according the Aljazeera Afghanistan’s acting finance minister has resigned and left the country after the Taliban armed group took more than a quarter of Afghanistan’s provincial capitals in less than a week.

As per Aljazeera the Taliban have captured nine provincial capitals in Afghanistan since Friday, including Faizabad, Farah, Pul-e-Khumri, Sar-e-Pul, Sheberghan, Aybak, Kunduz, Taluqan and Zaranj. Ghani arrived in Mazar as the Taliban captured Faizabad overnight, making it the ninth city to be overrun since Friday, AFP reported.

The Afghan leader held talks with Mazar’s long-time strongman Atta Mohammad Noor and infamous warlord Abdul Rashid Dostum about the defence of the city, as Taliban fighters inched closer to its outskirts, the wire service reported from Kabul. The increasing hold of the Taliban over Afghanistan can be seen from a map released by the AFP showing parts of Afghanistan under government control and territories under the influence of the Taliban, from April to August.

The loss of Mazar would be a catastrophic blow to the Kabul government and represent the complete collapse of its control over the north — long a bastion of anti-Taliban militias.

Hours before Ghani arrived, pictures posted on official government social media accounts showed Dostum boarding a plane in Kabul en route to Mazar, along with a contingent of
commandos. Fighting in Afghanistan’s long-running conflict has escalated dramatically since May, when the US-led military coalition began the final stage of a withdrawal set to be completed before the end of the month.

Further to the east of Mazar, in Badakhshan’s capital Faizabad, a local lawmaker told AFP that security forces had retreated after days of heavy clashes. “The Taliban have captured the city now,” said Zabihullah Attiq, confirming the latest city to fall.

Jawad Mujadidi, a provincial council member from Badakhshan, said the Taliban had laid siege to Faizabad before launching an offensive on Tuesday. “Unfortunately, after hours of heavy fighting the ANDSF retreated,” Mujadidi told Reuters, referring to national security forces.

A U.S. peace envoy brought a warning to the Taliban on Tuesday that any government that comes to power through force in Afghanistan won’t be recognized internationally after a series of cities fell to the insurgent group in stunningly quick succession.

Zalmay Khalilzad, the U.S. envoy, traveled to Doha, Qatar, where the Taliban maintain a political office, to tell the group that there was no point in pursuing victory on the battlefield because a military takeover of the capital of Kabul would guarantee they would be global pariahs.

After a 20-year Western military mission and billions of dollars spent training and shoring up Afghan forces, many are at odds to explain why the regular forces have collapsed, fleeing the battle sometimes by the hundreds. The fighting has fallen largely to small groups of elite forces and the Afghan air force.

Khalilzad’s mission in Qatar is to “help formulate a joint international response to the rapidly deteriorating situation in Afghanistan,” according to the U.S. State Department.

He plans to “press the Taliban to stop their military offensive and to negotiate a political settlement, which is the only path to stability and development in Afghanistan,” the State Department said.