Opelka rallies past Kyrgios in first round of ATP Toronto event 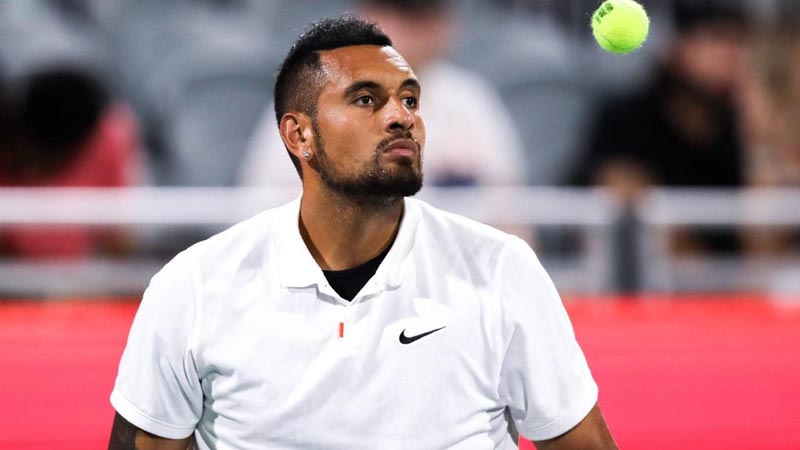 A ruling from the chair rattled Nick Kyrgios on Monday, sparking the Australian’s 4-6, 7-6 (7/4), 6-4 first-round loss to Reilly Opelka at the ATP Toronto Masters.

Kyrgios came undone after he protested that his American opponent illegally touched the net with his foot late in the second set. When the umpire failed to act on his complaint the number 80 lost concentration.

Despite standing two points from victory in the eighth game of the set, Kyrgios slowly came undone as the towering 2.11-metre Opelka turned the tide in a comeback effort in two hours.

Kyrgios is currently saddled with his lowest standing since he stood 144th at the start of Wimbledon seven years ago.

The Australian, who has played a limited schedule during the Covid-19 pandemic, was unable to focus on his game, constantly chattering angrily to his coaching box of two.

Fabio Fognini needed all of his skills to survive into the second round as the Italian showman beat Jan-Lennard Struff 6-7 (2/7), 6-2, 6-4.

An exhausted Fognini tossed a racquet over his shoulder into the nearby crowd after his effort, lasting almost two and a half hours, against the 46th-ranked German.

Along the way, the unseeded Italian was seen by both the doctor and a physio in the second set before drawing a warning for time wasting as he went off court after levelling at a set apiece.

Fognini trailed 3-1 in the final set, but fought back with a break for 4-4 after Struff saved five break points but could not manage on a sixth. A double-fault from the German two games later gave Fognini a match point, which he converted without hesitation.

Fognini finished with 26 winners while between them the pair committed nearly 90 unforced errors. Out of a cumulative total of 25 break points, only nine were converted.

The win earned Fognini a contest with fourth seed Andrey Rublev, who has won the pair’s matches at the ATP Cup and Wimbledon this season.

Harris will next play second seed and defending champion Rafael Nadal in a rematch of last week’s Washington third-round match won by the South African.

“Guys, I’m fine. It’s one of the weirdest things that ever happened to me. My heart started to go crazy for no reason,” the American posted on social media. “I just kept playing because it was so strange I thought I could go back to normal.”

The Croatian, who combined at the Tokyo Games with compatriot Ivan Dodig to win the silver medal in an historic all-countryman final against Nikola Mektic and Mate Pavic, will serve as the summer’s first hardcourt opponent for Norway’s Ruud.