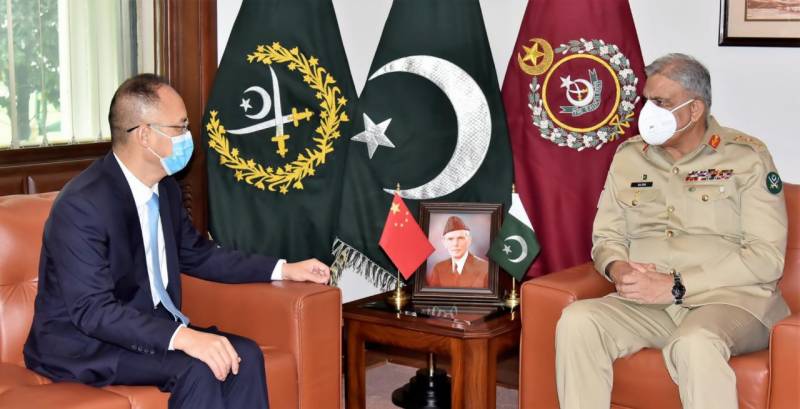 The Inter-Services Public Relations (ISPR), in a statement, said during the meeting at the GHQ, matters of mutual interests, defence collaboration, progress on CPEC, and regional security were discussed in detail.

The Chinese envoy appreciated Pakistan’s sincere efforts for peace and stability in the region, as he reiterated that Beijing shall continue to support Islamabad as a strategic partner. Director-General Inter-Services Intelligence (ISI) Lieutenant General Faiz Hameed was also present during the meeting, the military’s media wing added.

During their meeting last month at the GHQ, the army chief had told the ambassador that as China and Pakistan work for peace, they needed to stay strong to thwart designs of all inimical forces challenging their resolve. The army chief told the ambassador that both countries need to thwart the designs of those threatening their strategic cooperation. He extended heartfelt sympathies and deepest condolences to the government and the people of the Republic of China, particularly the bereaved families affected by the Dasu incident, one that killed nine Chinese nationals.

The army chief said Pakistan Army greatly values its brotherly relations with its time-tested friend and also assured full support and security of Chinese citizens working in Pakistan. “Both agreed on the need for continuous engagement and coordination for peace and stability in the region,” the military’s media wing added.