Safari Zindagi is different and unique 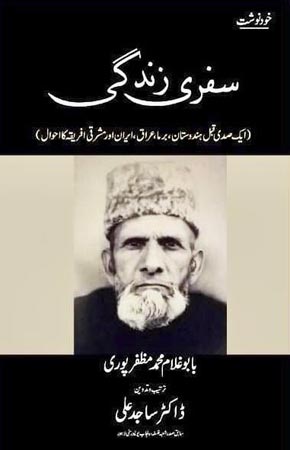 When this reviewer received a copy of the book titled ‘Safari Zindagi’ from a dear friend Dr Sajid Ali, search for similar works carried out elsewhere; autobiographies of a simple worker was started.

This book is the story of a sub engineer, who worked as a labourer as well and travelled practically whole of India and worked in its twelve provinces also. He stayed in Iraq and Iran for couple of years each. He spent seven years in Uganda and Kenya due to his service requirements. He stayed mostly in camps due to field work which was a part of his job specifications. So whatever he observed he wrote in the form a travelogue. Credit must be given to his grandson, Dr Sajid Ali who edited and compiled his grandfather’s writings in the book under review. Dr Sajid Ali is a PhD in Philosophy and retired as Chairperson of Punjab University’s Philosophy Department. His friends, Basir Sultan Kazmi, Javed Iqbal Awan and Professor Zameer Naqvi are intellectuals as well, who provided him cooperation in finalizing this assignment. He owes gratitude to his engineer friend Arshad Arain who explained to Dr Sajid the civil engineering terminologies.

In 1912, Dr Sajid Ali’s grandfather Babu Ghulam Muhammad Muzafarpuri left his home in Tehseel Nikoder, District Jalandhar to learn civil engineering works from a relative. The latter took him to Bandha, District Kanpur in Central India. Then they stayed in Bombay for five months and then they travelled to district Nagpur and Presidency Area in Madras where he joined a proper job. He then travelled to Saharanpur, Bannu and Noshki where on Iran border he worked on laying railway lines from Noshki to Irani border. He then travelled to Iraq and stayed there for one and a half years. Journey continued to places like Barodha, Lower and Upper Burma for a couple of years. He proceeded to Asaam via Dhanabad in Bihar area.

Babu got a job in Iran in Anglo Persian Oil Company. It was time when Iran’s king, Raza Shah Pahlavi took over. Babu gives detailed account of conflict between Raza Shah and Sheikh Khazal. When Raza Shah found out that English government was backing Sheikh, Raza involved League of Nations. English government backed off as Russia had also come forward in support of Irani government. Babu’s team was under carrying Survey work. It was based in a camp near Nasiri Ehwaz. This team was guarded by Irani soldiers instead of Sheikh Sahib’s. The team was equipped with latest surveying instruments. The situation was volatile. When the survey team reached Basra after completing survey of more than hundred miles survey, they came to know Sheikh was in prison. Governor had developed friendship with Sheikh and one night he was arrested and carried to Tehran as royal prisoner. Raza Shah converted death sentence into ransom money. All wealth at home or abroad was confiscated.

Babu got a job in Iran in Anglo Persian Oil Company. It was time when Iranian king Raza Shah Pahlavi took over. Babu gives detailed account of conflict between Raza Shah and Sheikh Khazal

H-Labour Moderator, Seth Wigderson has written on its Site that over time there have been a number of threads on worker autobiographies. He received reasonable response. On another site quert John Mellana succeeded in finding, or more likely creating, a bibliography of first-person narratives of American working people. There is one bibliography that will help, because it is well indexed and very many of the British workers covered by the book spent some time in the United States. It is John Burnett, David Vincent, and David Moyall, eds., The Autobiography of the Working Class is. There is also considerable information on activists who spent some time in the United States in Franco Andreucci and Tomasso Detti, eds., Il Movimento Operaio Italiano (5 vols. plus index) Etirori Riuniti, Rome, 1975). Thompson’s article on time, etc. appeared first in Past and Present, no. 38, 56-97. Another source one might consider is RANK AND FILE by Alice and Staughton Lynd. It is short bios of working class organizers. Many other links on this theme are available. This reviewer is sure that many other examples can be quoted from other countries and in other languages from the information on net.

The book under review by Babu is in Urdu language. The guy, apart from earning bread and butter for his family is also narrating sociopolitical scenario of the area he worked in. He used to have a dialogue with Hindus on the ‘Choot Chaat’ issues and the way of living. He compared the way of living of the followers of the two religions. Babu felt that Hindus were not eating in the utensils in which Muslims had eaten and Hindus not buying stuff from Muslims shops etc. made it difficult for Muslims to live in India. Then the concept of inter marriages was a big question. Even today the discrimination with minorities is getting strengthened with each day passing under BJP’s regime with Moodi sitting on top advocating Hinduvta. Babu felt it more even before Pakistan was created.

Babu has written chapters for his stay in Iraq Baroda, Ajmer Sharrif, lower and upper Burma, Bihar and Asaam. He also covers his job in African countries. Dr Sajid Ali mentions in is article that his grandfather Mian Gi, had started writing is memoires in 1944 while he was in Africa. Happenings of 1945 are mentioned in his autobiography. Then he returned to India desiring to compete for elections but he was late and Muslim League gave ticket to Wali Muhammad Goheer. Bahu along with poet Talib Jallundhri took part in canvassing. Mian Gi deliberately stayed long at one job. By doing so, one becomes coward, always thinking about the pension he would get after retirement. Nikoder and some other divisions were given to India by the British despite Muslim majority, disturbed Mian Gi. He was fond of reading newspaper which was not easily accessible in his village. He found a solution and sent money in advance. At least he got the newspaper even that reached him a day late. In 1960s he used to write long letters to Ayub Khan on restoring constriction. One day he was summoned to Deputy Commissioner’s office but he refused. On the contrary his attitude was very cordial with masses. Mian Gi had heart attack in 1963. He did not survive. According to his relatives his age at that time was 73. Dr Sajid Ali misses that Mian Gi had not mentioned in his autobiography of his association with Syed Attaullah Shah Bukhari, Maulana Habib Ur Rehman Ludheyanvi and Maulna Muhammad Ali Jallundhri of Majlis e Ehraar despite that he used to mention these names in his house. Dr Sajid Ali mentions that his grandfather’s hand writing was very bad. He would start writing from one corner of the page and never read the page for any mistake; Only Sajid’s father could read what he had scribbled. He took that register with him to America in 1986 when he went to stay with his sob Dr Amjad Zaheer where he made a neat and clean copy. Then Sajid’s cousin took away that register with him and everybody thought that it was lost. So Sajid finalised it and brought it to public now.

Separate chapters have been reserved for the places Babu went; Ajmer Shariff, Burma, Baar. Aasaan, Iran, Baroda, Africa’s countries like Uganda, Kenya, Mumbasa, Kenya’s Port and Nairobi. This book has been written by an engineer who worked in the design office and in the field and in the process observed the working in the overall scenario of the places where he was physically present. He fought for his rights and was successful. He gives the same advice to his next generation to keep on struggling till it manages to get its due rights! This book is very different and unique and the credit goes to Dr Sajid Ali.