* 'My heart is so heavy,' Timberlake wrote on Instagram on Friday, alongside photos and videos of Hurst 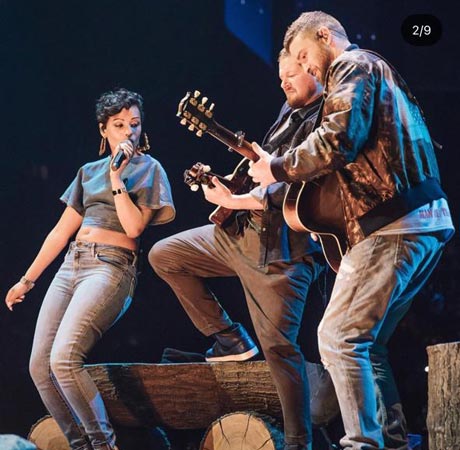 Justin Timberlake is paying tribute to his late backup singer Nicole Hurst, who recently died at age 39. Hurst, who has also performed onstage with Kelly Clarkson and Janet Jackson, passed away after battling cancer on and off for eight years, although the official cause of death was not made public.

“My heart is so heavy,” Timberlake wrote on Instagram on Friday, alongside photos and videos of Hurst. “We lost a beautiful soul this week. Nicole lit up every room she walked into. On and off the stage she was a constant source of joy and positivity. Some things feel so unfair and we will never understand why they happen. What I do know is that we were blessed to laugh with her, to travel with her, and to experience her infectious smile and love for a life filled with music.”

In his post, Timberlake included a video of Hurst taking centre stage at one of his concerts with a solo performance of Lauryn Hill’s “Ex-Factor,” with himself accompanying her on guitar. In another clip, she says of the pop star, “my bro over here” picked out the song, which he included in his set lists in his 2018 Man of the Woods tour.

“Nicole, it’s not enough to say that I am going to miss you dearly,” he wrote. “Thank you for your light. I will do my best to carry that with me. I love you, my sister. Forever family and forever a TN Kid.”

Hurst was diagnosed with stage 2 triple positive breast cancer in July 2013. She was 31.

In his post, Timberlake included a video of Hurst taking centre stage at one of his concerts with a solo performance of Lauryn Hill’s ‘Ex-Factor,’ with himself accompanying her on guitar

“I think one of my first thoughts was, am I going to die?” she told Houston’s ABC 13 TV station. “I had four months of chemo followed by my surgery which I had a mastectomy. Even while I was on chemotherapy my tumour doubled in size.”

Her cancer reached stage 3 before she was declared in remission in 2015.

In January 2019, Hurst’s doctors discovered that her cancer had spread to her brain. She underwent radiation treatments.

“The reality is, it doesn’t matter how amazing your life looks, your background, net worth, or even who you sing with, life does not discriminate and can turn on you at any time!” she wrote on Instagram that August, alongside photos of herself in the hospital as well as pics with friends, including Timberlake and her fellow touring backup performers. “My battle isn’t over yet, and I don’t know what the future holds…really none of us do. But I know by the grace of God, along with the unrelenting support from my incredible family and friends, I’m fighting this thang with everything in me, and so far I’m winning cause I’m still here!”

On Friday, ABC 13 journalist Samica Knight wrote on Instagram, “My beloved friend @nicolerhurst of 25 years, the fighter, the loving daughter, the sensational singer who’s traveled the world sharing her beautiful gift, the girl with the biggest smile in the world & the friend to everyone … lost her hard fought battle with cancer. I mean she fought hard.”

She continued, “My mom constantly said, ‘Nicole is my inspiration’ because she REFUSED to accept defeat. For most of her eight-year battle, she’d fly into Houston, head to @mdandersoncancercenter for chemo & literally fly right out to sing on the world’s biggest stages. I remember saying ‘Nicole, did I see you at the White House?’ She laughed, ‘Girl, yeah.'”

Knight said her last conversation with Hurst took place “just a few days before she gained her wings.” She wrote, “She was a little weak but our quick chat ended the way it’s ended the last eight years. She said, ‘I love you, girl. I really do.’ I was fighting back tears this time & said, ‘I love you too, girl.’ You’re singing in the heavenly choir now.”