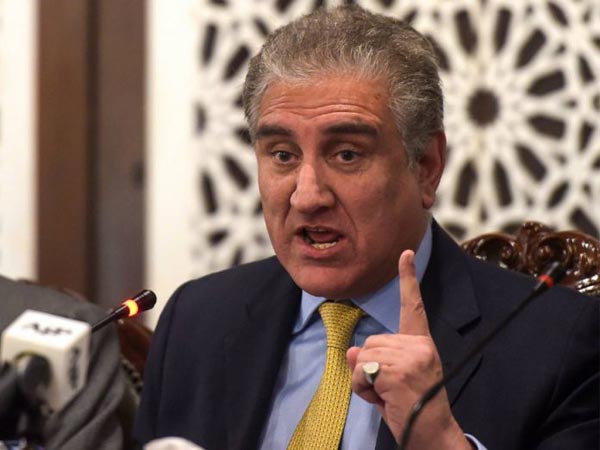 Foreign Minister Makhdoom Shah Mahmood Qureshi Monday said that Pakistan has played its role in Afghan peace and reconciliation process and now it is up to Afghan leadership to further move the intra-Afghan dialogue process. Addressing a press conference here, the foreign minister said the Afghan leadership would itself be responsible for the success or failure of the dialogue process. He regretted that allegations were being leveled against Pakistan for the failure of Afghan peace process. He said that Pakistan has repeatedly urged against pointing fingers, adding, “If you have an issue, bring it up, discuss it and let’s find a way out.” “I have invited the Afghan foreign minister in writing to visit Islamabad to raise the issues that he has in mind so that as neighbours, we can discuss and resolve them,” he said, adding that Pakistan has also urged the Afghan government to refrain from a “blame game” and engage with Pakistan in a meaningful manner to address the challenges to peace and security in the region.

Foreign Minister Qureshi regretted that the country was being made a ‘scapegoat’ for the mistakes of others in Afghanistan. He Pakistan itself is a victim. “We have paid a huge price… we’re the victims… this has to be understood… we have 80,000 casualties and we suffered economic losses,” he added.

Qureshi categorically rejected the allegations of Afghan leadership over Pakistan’s role in the conflict, adding that the future of Afghanistan will be decided by its people. “If peace talks succeed then it would not be Pakistan who would get the credit but the Afghan leadership,” he said. “We see all sides of the conflict as Afghans. It is unfortunate to scapegoat Pakistan for the failures of others. The issues of governance and meltdown of Afghan national defence forces needs to be looked into, instead of simply pointing fingers at Pakistan,” he added.

He underlined that the peace process in Afghanistan is at a critical juncture. It is important that all energies are focused at finding an inclusive, broad-based and comprehensive political settlement through a process that is Afghan-led and Afghan owned, the minister added.

He reiterated that it was for the Afghans to decide about their future. He said Pakistan had consistently been advocating that there was no military solution to the conflict and a ‘negotiated political solution’ was the only way forward, something which the international community now agreed. He said Pakistan would continue with its role in the Afghan peace process as there should be no ambiguity.

The foreign minister said Prime Minister Imran Khan had been consistently saying that there was no military solution to the Afghan issue. He stressed that a well negotiated, all inclusive and broad-based political settlement was the only way forward to establish peace in Afghanistan.

To a question the foreign minister maintained that they had facilitated the Afghan civilians despite the coronavirus pandemic. “Pakistan has been a generous and hospitable host to the 3 million Afghan refugees for four decades despite its limited resources,” he said, adding that if there is any new influx of Afghan refugees, Pakistan does not have the capacity to host them. He said it would be the collective responsibility of the international community and other immediate neighbours of Afghanistan in that case. Pakistan had been urging the international community to play their due role in the reconstruction of Afghanistan and for the regional peace and stability.

Qureshi said India has violated its obligation as the United Nations Security Council’s president by not allowing Pakistan’s request to brief the forum on the situation and its role in Afghanistan peace process.

To another question, he said Pakistan had clear priorities and about China-Pakistan Economic Corridor (CPEC), and there is a national consensus. He said CPEC has been targeted by the enemies of Pakistan, but they have unflinching resolve to foil all such attempts. Citing different incidents like Serena, Dasu and Johar Town attacks, and Quetta blasts, he reiterated that work on CPEC would continue.