Opp again forces NA session to be adjourned over quorum 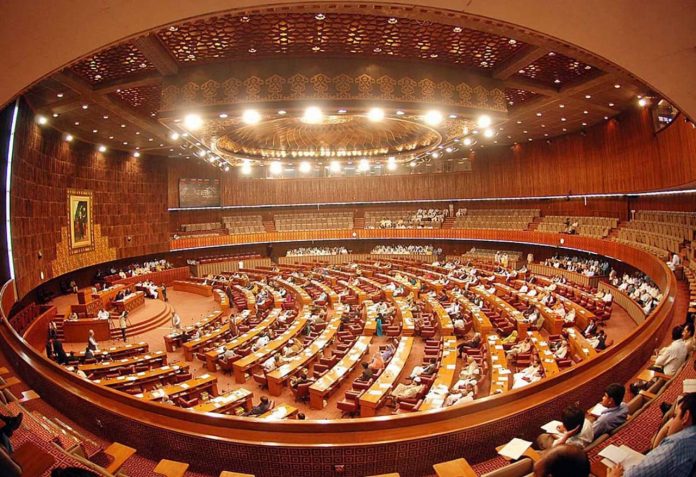 After question hour, the opposition members routinely pointed lack of quorum in the National Assembly and the Speaker was left with no option but to adjourn the House because the numbers were not complete.

For the last several working days of the National Assembly, it has become a routine of the opposition members to point out quorum because majority of the members are not interested in legislative process.

Earlier, during question hours, Federal Minister for Energy, Hammad Azhar informed the House that the government was going to shut down some power generation plants, which were unable to provide power when asked for claiming that they were in miserable condition. Employees working in these power plants were taking their salaries but contribute nothing to the country, however, he also said that they would be shifted to other plants. Under Capacity Reduction Strategy, the minister said some of these plants would be shut down permanently.

Answering another question, the minister claimed that load shedding across the country has finished since the last few weeks. However, in some areas there was load shedding due to the poor transmission system. The minister was of the view that majority areas were confronting the poor transmission system for which the government had already initiated up-gradation process.

Hammad Azhar also said that restructuring, reforms, renegotiation of power rates and privatization of all discos are in progress.

More than two-third of residential areas and 100 percent of industrial areas in Karachi are exempted from load shedding, revealed a reply, submitted in the NA, by the power ministry.

In a written response regarding load-shedding in Karachi during the question and answer session of the National Assembly, the Ministry of Power said that 78 percent of the residential areas of the city are exempted from outages.

The industrial sector enjoys 100 percent exemption from power outages, the federal ministry, whose portfolio is being held by Hammad Azhar, said in his reply.

In another question, member of the National Assembly expressed serious concern over no response from Supreme Court over a question raised by parliament regarding establishment of Model Courts across the country.

Malika Bukhari informed the House that up till now 13 letters have been sent to SC for various questions but was told that they are not bound to reply such questions. She said that the ministry can request the apex court but it cannot force them to reply. PPP leader Naveed Qamar said that it was unfortunate that state institutions could not reply to the parliament. He went on to say that the question was very simple as it was about the establishment of the Model Courts. Speaking on the occasion, Baber Awan said it is true that between Feb 7, 2020 and Aug 2, 2021 several letters were sent to SC, but no response has been given.

Speaker Asad Qaisar told the House that he will first contact the Attorney General of Pakistan and then respond to the House.