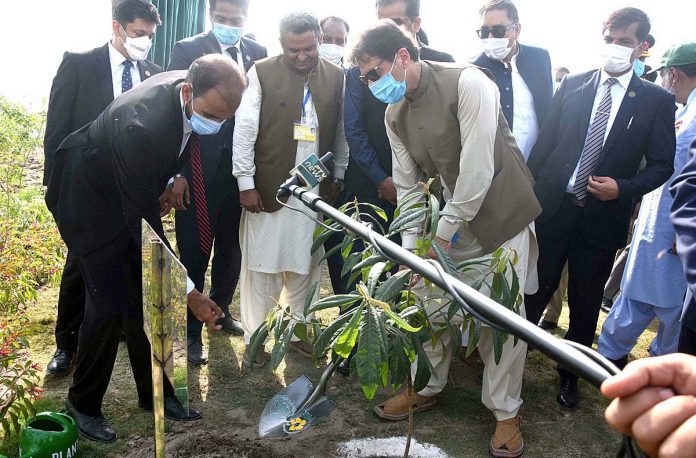 LAHORE, Aug 9 (APP): Prime Minister Imran Khan on Monday highlighting the importance of forests in checking global warming and pollution urged the masses, especially, youth to plant at least one tree each and look after it to ensure a clean and pollution-free Pakistan for the future generations.

He expressed these views while inaugurating the world’s biggest Miyawaki urban forest here, as part of monsoon drive under the 10 Billion Tree Tsunami project. The Prime Minister hoped that the development of Miyawaki forest in the provincial capital will help revive the past glory of Lahore, which used to be a city of gardens with trees planted all around, and now was considered as one of the most polluted cities of Pakistan.

The Prime Minister lauded the efforts of Chief Minister Punjab and his team for developing Miyawaki forests in Lahore. On this occasion he was told that Miyawaki forest has been developed over 100 kanals with a total of over 160,000 plants which grow ten times quicker than a normal forest owing to the unique Miyawaki technique

It uses specialized land preparation as well as indigenous varieties with varying growth rates to produce fast growing urban forests.  The Prime Minister was further told that another 53 Miyawaki forests were being grown at different parts of Lahore to create sinks for carbon as well as for better pollution abatement in the city.  All have been geo-tagged for monitoring of their growth and development. About 500 million trees were being planted across the country under the ongoing monsoon plantation drive which was the largest ever such drive in Pakistan.