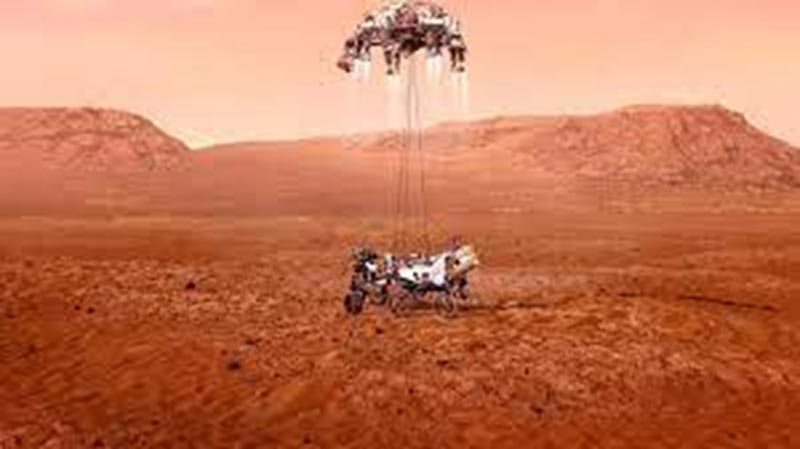 NASA’s Perseverance drilled into the surface of Mars but failed in its initial attempt to collect rock samples that would be picked up by future missions for analysis by scientists on Earth.

The US space agency published images Friday of a small mound with a hole in its center next to the rover — the first ever dug into the Red Planet by a robot.

But data sent to Earth by the rover after its first attempt to collect a sample and seal it in a tube indicated no rock had been gathered. “While this is not the ‘hole-in-one’ we hoped for, there is always risk with breaking new ground,” said Thomas Zurbuchen, associate administrator for NASA’s science mission directorate, in a statement.

“I’m confident we have the right team working this, and we will persevere toward a solution to ensure future success.”

The drill hole is the first step of a sampling process that is expected to take about 11 days, with the aim of looking for signs of ancient microbial life that may have been preserved in ancient lakebed deposits.

The mission took off from Florida a little over a year ago and Perseverance, which is the size of a large family car, landed on February 18 in the Jezero Crater.

Scientists believe the crater contained a deep lake 3.5 billion years ago, where the conditions may have been able to support extraterrestrial life.

NASA plans a mission to bring around 30 samples back to Earth in the 2030s, to be analyzed by instruments that are much more sophisticated than those that can be brought to Mars at present.

Working at her vegetable stall in Caracas, Marisela Lopez wonders what she’s going to do with the sudden flood of cash customers have been unloading on her.

Venezuela announced Thursday it would knock six zeroes off its currency — the third time in 13 years it has redenominated the bolivar.

Faith in physical bank notes is at an all-time low, and people want rid of them.

“We also have to quickly get rid of the cash because if we keep collecting the cash, what next? What will we do with the banknotes?” said Lopez, 34.

The new measure, which will go into effect in October, is the result of the world’s highest inflation: almost 3,000 percent in 2020.

That has created wild price swings and a move towards the US dollar, increasingly favored by customers and businesses alike in the country of 30 million.

“No (local) cash ever came in here, just foreign currency. Now, I don’t know where all this money has come from,” exclaimed Carmen Ramirez, 48, who works just meters (feet) away from Lopez in the Catia market in western Caracas.

As it is in Venezuela, piles of money are barely enough to buy a few vegetables or a few kilograms (pounds) of meat.

Purchasing power has been decimated by four years of hyperinflation and eight years of recession.

Few people can afford to deposit their notes in a bank.

In Catia, there had been rumors for two weeks that a redenomination was on its way.

That is when “the bolivars that didn’t exist started to appear,” Ramirez, who sells meat, told AFP.

Devoured by inflation, the bolivar became ever shorter in supply, fewer places accepted it and what there was started to pile up unused.

“I hope this time the president will manage to achieve his objective… to go forwards, to stay afloat, and there won’t be another devaluation that takes us to the bottom,” said Ramirez.

As the bolivar depreciated, Venezuelans increasingly started using the dollar, while many shops and supermarkets began accepting the Zelle electronic payment system that requires its users to hold a bank account outside of the country.

Before receiving banknotes that “don’t work,” Lopez’s customers paid either by card or with foreign currencies, mostly dollars. Many payments are also made by bank transfer.

“When you’re in the streets, you even see banknotes on the motorway, banknotes are thrown away, burned; we don’t respect them any more… sometimes I say, ‘Look, this is worth nothing anymore,'” said Lopez.

Only public transport is still dependent on the bolivar.

Those three bills, together worth 1.7 million bolivars, equated to only about 60 cents at the official rate. Now that is down to just 42 cents.

“It’s shameful, our money is rolling around on the floor,” said shopkeeper Armando Olivier, 70, who sells women’s garments.

The government keeps a tight control on the exchange of foreign currencies, which has created a parallel black market exchange, but the constant redenominations sent the rates skyrocketing.

Olivier has a message for the central bank: “Put our currency to work! Our liberators will be beating their chests in their graves because our money is worth nothing.”

The failure of previous redenominations has left many Venezuelans skeptical about the potential benefits this time around.

“They’ve taken a lot of zeroes off the bolivar, and nothing has improved,” said Olivier.

Three zeroes were removed in 2008, and another five 10 years later.

“When they started taking off zeroes, we thought the currency would gain value and that it would be a strong bolivar, but that was absurd,” said Olivier.

Pedro Salcedo, a 70-year-old security guard, had not even heard about the redenomination.

“This won’t solve the inflation,” he said, echoing the warnings sounded by economists highlighting the lack of an economic plan to accompany the redenomination.

“You’ve got to do a thousand and one things. Today I couldn’t do all my shopping. I came to buy chicken and fish and all I have is chicken. It wasn’t enough,” said Salcedo, holding a cloth bag that was only half full.