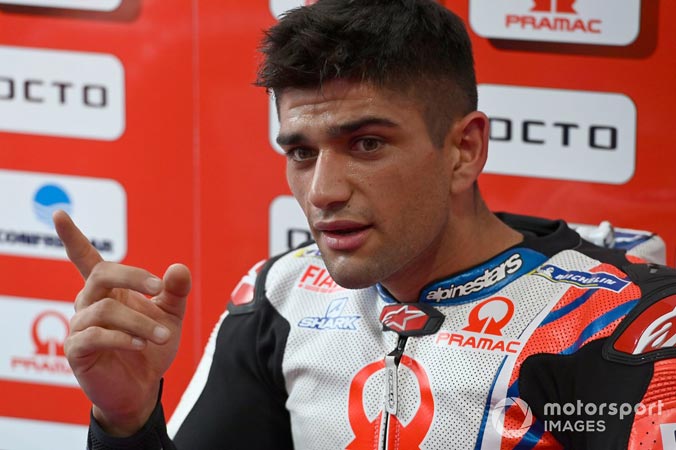 Rookie Jorge Martin of Ducati-Pramac cruised to his first MotoGP victory in the Styria Grand Prix on Sunday, finishing comfortably ahead of Spanish compatriot and reigning champion Joan Mir on a Suzuki.

French championship leader Fabio Quartararo of Yamaha was third in a race that had to be restarted after the KTM of Spaniard Dani Pedrosa and the Aprilia of Italian Lorenzo Savadori caught fire in the middle of the track following a crash.

Martin grabbed the lead after some early jostling and pulled away to finish 1.58sec ahead of reigning MotoGP champion Mir.

The victory restored Ducati’s domination at the Red Bull Ring, the fastest track in MotoGP, where they won five straight races before Miguel Oliveira interrupted their streak last year on a KTM.

“I don’t believe it. That’s why I’m not so excited,” said Martin, who dedicated his victory in only his sixth MotoGP race to his grandfather who is in hospital.

“The last laps I was thinking a lot of things,” he said. “That’s why I did worse in the last laps but I had this gap to manage.”

Mir, meanwhile, recorded the best result of his title defence.

“Today was close,” he said. “I needed a couple of 10ths per lap to fight with Jorge.”

The riders return to the Red Bull Ring next Sunday for the Austrian Grand Prix.

Quartararo finished 8sec further back, ahead of Australian Brad Binder on a KTM who gained two places on the final lap.

“When there’s a red flag it’s always tough,” said Quartararo, adding that both Mir and the Ducatis were faster.

“The best goal was to finish on the podium,” he said. “Good day.”

Quartararo increased his lead in the standings to 40 points over compatriot Johann Zarco who was sixth on a Ducati-Pramac. Mir climbed to third another 11 points back. Martin moved up to 12th overall.

“So happy for Jorge, he has taken some points from Joan,” said Quartararo.

The race had been halted after the spectacular third-lap crash.

Television footage showed Pedrosa crashing first and then Savadori riding his Aprilia into the downed KTM.

The bikes came to rest in the middle of the track and caught fire.

Pedrosa, returning to MotoGP after two years as a test rider, walked away but Savadori was evacuated on a stretcher although clearly conscious.

Pedrosa was fit to ride in the second race on a back-up bike and finished 10th.

Earlier, Marco Bezzecchi gained his first victory of the season as he took the Moto2 race.

On a track still drying after overnight rain, the Italian crossed the line more than a second ahead of Spaniard Aron Canet of Boscoscuro, the only finisher in the top 14 not riding a Kalex.

“Tricky, tricky race,” said Bezzecchi. “Aron was very fast to the end but I kept something in my pocket for the last two laps.”

In the Moto3 race, 17-year-old Pedro Acosta gained his fifth victor of the season after fellow Spanish teenager Sergio Garcia of GasGas crashed on the last lap.

Championship leader Acosta crossed the line alone while Garcia climbed back on his bike and held off Italian Romano Fenati of Husqvarna and the Spaniard JaumeMasia of KTM.