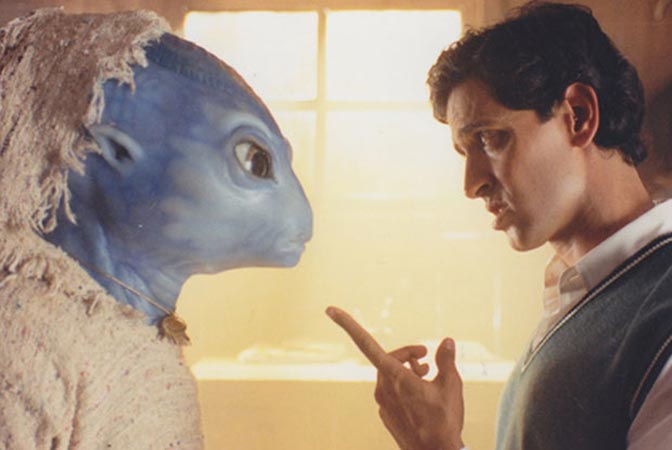 Back in 2003, Hrithik Roshan and Preity Zinta’s film ‘Koi Mil Gaya’ was one of the highest grossing films in Indian cinema garnering positive response from critics and fans alike. Helmed by Rakesh Roshan, the film is considered a milestone of its genre, and is also the first Indian film featuring aliens. Having said that, the movie clocked 18 years today.

To celebrate the same, Hrithik took to his Instagram handle to share a couple of stills from the movie featuring one of the main characters Jaadoo, the alien, who had become so popular, that it inspired a spin-off series too. The pictures were accompanied by a little note which read, ‘To the one who filled Rohit’s and personally my life with happiness & magic. He held Rohit’s hand, healed his scars and made him believe in miracles.’

The actor reminisced his attachment towards Jadoo and added, ‘Jaadoo was merely 3 when he entered Rohit’s life . 18 years have passed by, he turns 21 today. Sometimes , I wonder how he would look like today! What do you guys think ? Happy birthday Jaadoo!’

On the work front, Hrithik was last seen in ‘War’ alongside Tiger Shroff and Vaani Kapoor. He was also seen in ‘Super 30’ sharing screen space with Mrunal Thakur. The actor is reported to team up with Saif Ali Khan for the Hindi remake of the 2017 Tamil superhit film ‘Vikram Vedha’. He also has a project alongside Deepika Padukone titled ‘Fighter’.