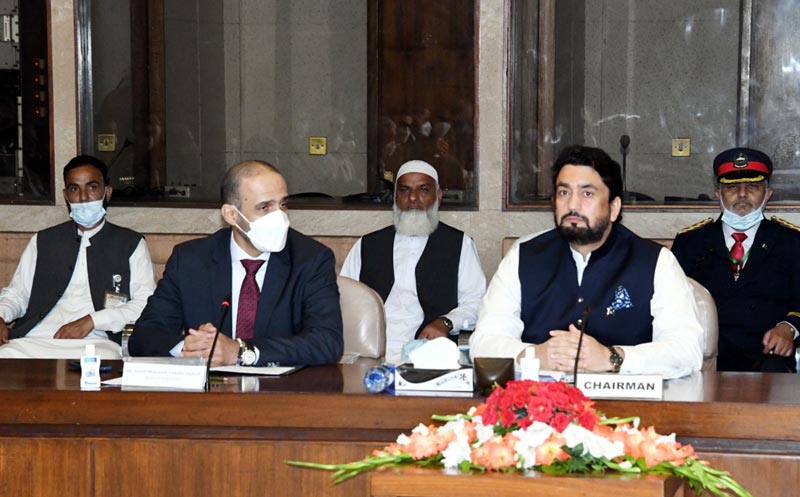 Chairman Kashmir Committee Shehryar Khan Afridi Sunday urged the OIC-IPHRC to act immediately to help save the suffering humanity in the Indian Illegally Occupied Jammu and Kashmir (IIOJK) before it’s too late as Indian genocide against Kashmiri people is touching new highs.

“I fear there would be no Kashmir to save in two years’ time if Indian demographic terrorism is not stopped as the Illegally Occupied regime in Jammu and Kashmir is fast changing the demography of the Indian Illegally Occupied Jammu and Kashmir (IIOJK),” said Shehryar Khan Afridi while addressing a special meeting of the Committee held to brief the visiting IPHRC delegation.

Welcoming the delegates of the OIC, Shehryar Afridi expressed gratitude to the delegation for heeding to the wails of Kashmiri mothers and daughters mourning their martyrs.

He said that the humanity is bleeding in Indian Illegally Occupied Jammu and Kashmir (IIOJK) but the prosperous world is a silent spectator. He said demographic changes are taking place in the IIOJK and 4.1 million new domiciles have been issued to non Kashmiris brought from mainland India which is a violation of the Indian constitution.

He said that the Indian regime is implementing genocide tools and is not providing medical facilities to the freedom loving Kashmiris jailed. He said that Illegally occupational regime of India is violating the basic rights of freedom of speech and any Kashmiri who writes anything on digital media, is pushed behind bars under notorious UAPA laws.

He said while humanity is bleeding in the IIOJK, festivity, development and freedom are the order of the day.

He said all the political parties took part in the elections recently held in Azad Jammu and Kashmir. He said that recently Kashmir Premier League has been launched to help showcase the talent of the Kashmiri youth.

He said that its not about Kashmir and rather its about the suffering humanity which needs assistance from the OIC and the United Nations.

He said Pakistan has fought war against terrorism to save the world from this menace and have given unprecedented sacrifices and the world needs to value the sacrifices given by the brave Pakistani nation.

He urged the UN and the prosperous world to wake up from the deep slumber and spring into action to help the sufferings of the people of Indian Illegally Occupied Jammu and Kashmir. He asked the delegates to apprise the Committee on the steps taken on the OIC delegation report on human rights violations released in year 2017.

Dr Mohamed Saeed Abdullah, the Chairman of the IPHRC delegation, said that despite the Covid-19 situation, the IPHRC decided to undertake this visit due to the rising human rights situation in Jammu and Kashmir.

“We also issued a report after our first visit to Jammu and Kashmir and this is our follow up to view the updated situation in Jammu and Kashmir. It’s quite different visiting the Kashmiri areas and reading stories about the suffering of the people of Jammu and Kashmir,” he added.

Dr Haci Alo Aeikgul, another member of the IPHRC, briefed the Committee on the updates on the steps taken by the OIC delegation and said that India was neither cooperating nor India was allowing the delegation to visit Jammu and Kashmir.

He said that the New York Times has reported that due to Indian oppression, 500,000 people have been sent jobless and US$ 5 billion have been lost.

He said that OIC must use a third country to help raise the Kahsmir issue at the International Court of Justice (ICJ) on the Rohingya genocide.

Dr Waleed Rasool, head of Kashmir Committee’s Advisory Board on Academia, briefed the delegates on the demographic terrorism by Indian occupational regime in Indian Illegally Occupied Jammu and Kashmir.

He said that Indian government had waged a war against Kashmiris was form all sides and systematically, Hindu population was being increased in IIOJK while Muslims population was decreasing.