President for effective building of narrative to counter Islamophobia

* Fawad says in modern era, wars are fought on media and only those nations are successful which have strong narratives 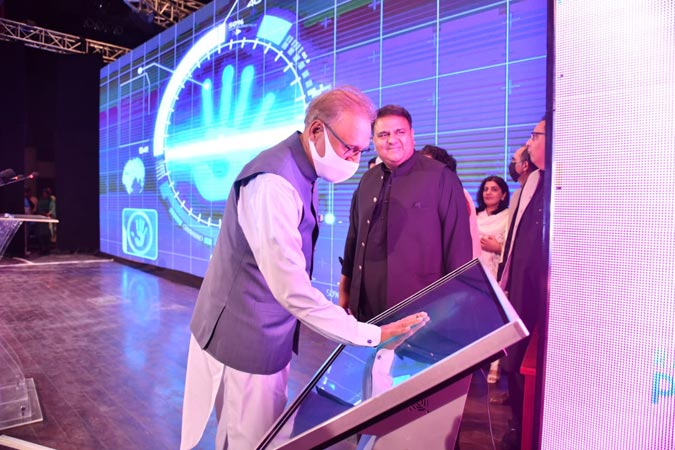 The president said through effective utilization of latest media platforms, Kashmir issue should be raised in more effective manner throughout the world whereas, the Muslim Ummah must present its narrative over Islamophobia.

He was addressing a launching ceremony of digitalization of the state media organizations; including the Associated Press of Pakistan (APP), Pakistan Television, Radio Pakistan and Digital Media Wing (DMW) held at Pakistan-China Friendship Center.

The president expressed the optimism that with this transformation process, outreach of country’s state media would be enhanced.

He said the era of digitalization of state media outlets would help build ‘a real image and true culture of Pakistan’.

The ceremony was attended by Begum Samina Alvi, Minister for Information and Broadcasting Chaudhry Fawad Hussain, Minister of State for Information and Broadcasting Farrukh Habib, Speaker of the National Assembly Asad Qaisar, Minister for Human Rights Dr Shireen Mazari, Senator Faisal Javed, parliamentarians, media persons,and officials of the Information Ministry and state media outlets. Dilating upon the history of PTV, the president observed that it had undergone huge changes from a black and white screen to now being converted into high definition (HD).

He said the PTV had introduced great artists and legends to the world including great late comedian Moeen Akhtar.

Congratulating the Minister for Information Chaudhry Fawad Hussain for his endeavours to introduce these much-needed changes, the president also emphasized upon busting of fake news being circulated by enemies of Pakistan.

He said most recently, India had propagated and churned out fake news against Pakistan. Minister for Information and Broadcasting Chaudhry Fawad Hussain on Saturday said in the modern era wars were being fought on the media, and only those nations were successful which had strong narratives.

Addressing the launching of National Digital Media Platform under the Ministry of Information and Broadcasting, he said the step would help project Pakistan’s image and the national narrative at the international level more effectively. He said in old days wars were fought with armies, and swords and guns, but now with narratives and image building. He said unfortunately the Ministry of Information and Broadcasting in the past had been downgraded as it became the mouthpiece of then ruling parties. However, today the ministry was doing its job of projecting the state narrative as the present government was not following the past practice, he added.

Due to weak narratives, the minister said, the countries lost their strategic importance. Despite martyrdom of over 70,000 Pakistanis in the war against terrorism, Pakistan remained on the defensive as it could not project the above sacrifices in an effective manner, he added.

Fawad said this was an important day for transformation of the official media in Pakistan. The Pakistan Television, which was launched in 1964, was going HD (High Definition), Radio Pakistan shifted to Internet and the Associated Press of Pakistan (APP) was digitalized. He said the present government had established the Digital Media Wing in the Information Ministry to project the country’s narrative on digital platforms.

He said the APP was being digitized to compete with leading world news agencies like Reuters and AFP. He said the government had recently approved the National Digital Cable Policy 2021 for cable operators, who would be given loans under the Kamyab Jawan Programme.

The minister said despite many problems the Press Information Department had become paperless, as all the process of issuance of advertisements to the media outlets, including the billing process, had been computerized with elimination of human involvement.