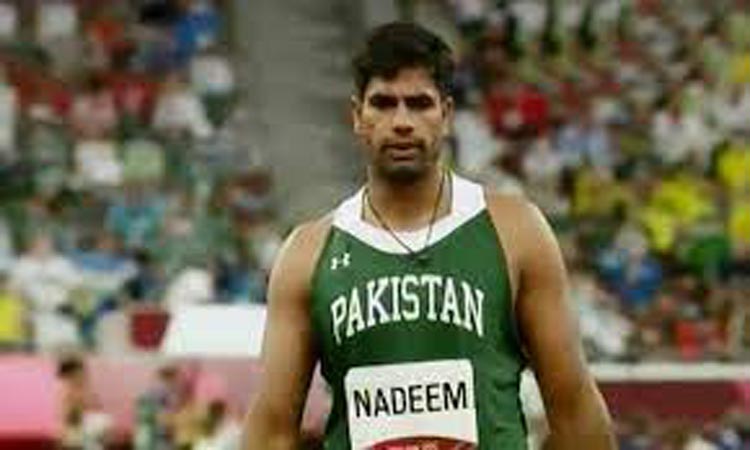 LAHORE: Pakistan javelin thrower Arshad Nadeem on Saturday came within touching distance of winning a rare Olympic medal for the country but eventually missed out as he finished fifth in men’s javelin throw event in Tokyo. Nadeem, at one point in the competition, was placed as high as fourth before being surpassed by rival athletes. Neeraj Chopra won the men’s javelin with a best throw of 87.58 metres, claiming a historic first Olympic gold in athletics for India. The Czech Republic’s Jakub Vadlejch won silver with a best attempt of 86.67 metres and Vitezslav Vesely claimed the bronze with 85.44.

Nadeem threw for 82.91m on his opening attempt of the final round and 81.98m on the second. His final attempt of the round and competition was a foul as he finished fifth — just two shy of a podium finish that would have netted him a rare medal. His main rival, India’s Neeraj Chopra, saw both his attempts of the final round adjudged as fouls but his 87.58m throw in the opening round was good enough to get him the coveted gold medal. Meanwhile, world number one Johannes Vetter of Germany failed to make it out of the opening round with a disappointing 82.52m in first attempt followed by two foul throws.

Nadeem finished fourth in the opening round with a throw of 84.62 metres on his third attempt. India’s Neeraj Chopra topped the opening round with a throw of 87.58m. Nadeem’s first throw landed at a distance of 82.40 — well below his personal best of 86.38m. His second attempt was deemed a foul. However, it is common for throwers to take time getting warmed up and work their way up to bigger distances. That is precisely what happened with Nadeem, who threw for 84.62m on his third attempt. Chopra was the only thrower to clear the 87m mark in the opening round. He did so on each of his first two attempts before throwing for an underwhelming 76.79m on his third attempt. No one else went past 85.44m (Vitezslav Vesely). Nadeem was one of 12 throwers hoping to capture Olympic gold and perpetual glory for their countries. The man from Mian Channu has a personal and season best of 86.38 metres, and is ranked 23rd in the world. Meanwhile, the entire nation on Saturday had nothing but praise for Nadeem for his tremendous sportsman spirit, despite having entered without access to facilities at par with those available to other athletes. Nadeem missed out on a podium finish but won the nation over with the determination he displayed throughout the contest.Agencies