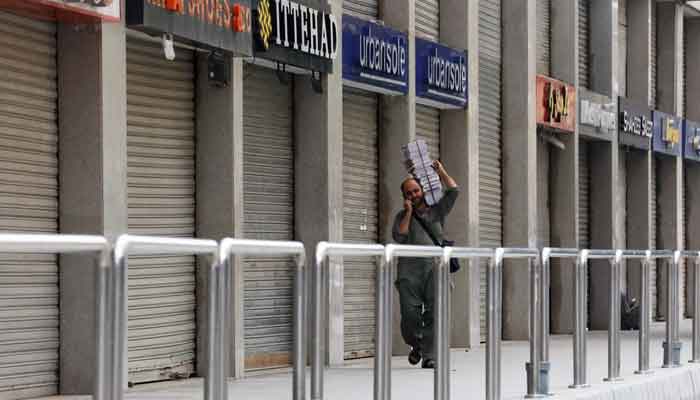 The Sindh government will end its nine-day coronavirus lockdown on August 9, the National Command and Operations Centre announced on Saturday, as it praised the province’s efforts to curb the pandemic.

A statement was issued by NCOC following a joint session which was chaired by Federal Minister for Planning, Development, and Special Initiatives Asad Umar, and attended by Chief Minister Sindh Murad Ali Shah, Special Assistant to Prime Minister on Health Dr Faisal Sultan, Gen Hamood and other team members from NCOC.

The coronavirus situation in Sindh, particularly in Karachi, “was discussed at length”, according to the statement. It said that a need for “better coordination” and an “enhanced interaction at all levels” was emphasised. It was decided that Sindh would follow the non-pharmaceutical intervention (NPI)- based guidelines the forum had announced for 13 high infection rate cities earlier this week, which include Karachi and Hyderabad.

The matter of the reopening of Sindh’s schools and leftover exams will be discussed in the upcoming meeting of the Inter Provincial Education Ministerial Conference (IPEMC). The forum also recognised the need for a special emphasis on the implementation of safety precautions in view of Muharram and when the lockdown is lifted on August 9.  It was decided that “smart lockdowns” in high disease prevalence areas will be enforced to curb the spread of the virus.

Last Monday Umar announced new restrictions in major cities of Pakistan in view of the rising number of coronavirus cases. The minister said that the new coronavirus restrictions will come into effect on August 3 and will remain in place until August 31.

In Punjab, restrictions will be imposed in Rawalpindi, Lahore, Faisalabad, and Multan; in Khyber Pakhtunkhwa, Peshawar and Abbottabad will see new restrictions; in Azad Jammu and Kashmir, restrictions will be imposed in Muzaffarabad and Mirpur; while in Gilgit-Baltistan, new rules will apply to Gilgit and Skardu. As for Sindh, it was observed that lockdowns are already in place, but after August 8, in Karachi and Hyderabad, new curbs will apply.

Pakistan, which is battling a fourth wave of the virus, reported a high of 95 deaths, since May 20, when 131 deaths were reported. With the new fatalities in the last 24 hours, the overall death toll has reached 23,797. The country reported 4,720 new infections, pushing the total caseload to 1,063,125.

NCOC data showed that 57,233 tests were taken in the last 24 hours to check for COVID-19. The current positivity ratio stands at 8.24%. Earlier this week, the COVID-19 positivity rate went over 9% for the first time in nearly three months. The country last recorded a coronavirus positivity rate of 9.12% on May 10.