Following in the footsteps of the Obamas, Bond and Bono on a fabulous trip

* Monaco is a constitutional monarchy that has been run on and off for over 700 years by the House of Grimaldi, from its family seat of the Grimaldi Palace 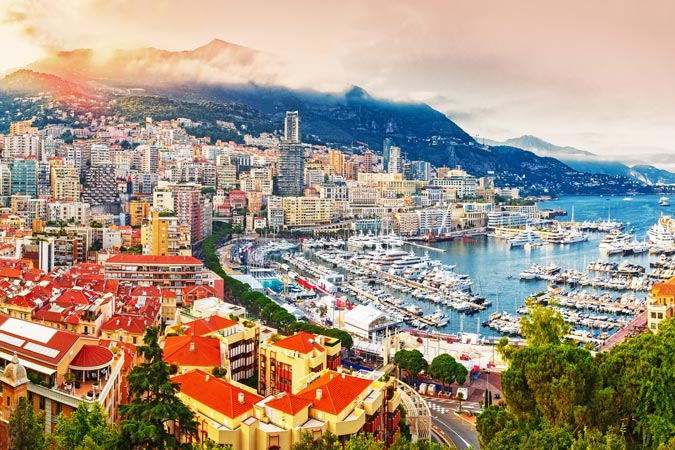 While it is true that it is used as a tax haven by oligarchs and tycoons, the description is unfair.

Monaco is a constitutional monarchy that has been run on and off for over 700 years by the House of Grimaldi, from its family seat of the Grimaldi Palace.

This once sleepy Principality was transformed in the late 1850s when the Blanc family bought the licence to build a casino and persuaded Prince Charles III to rename a downmarket seaside area known as Les Spelegures to Monte Carlo. By 1869, the casino was making so much money that the Principality could afford to abolish income tax for residents. This elegant hotel, designed in the Belle Epoque style, is in immaculate condition and is a wonderful, and discreet, place to stay. Hotel guests have access to the amazing 6,600m sq Thermes Marins Monte-Carlo spa, complete with a heated indoor pool and a fabulous view of the sea.

Our beautiful suite, with its muted colour design and evocative wallpaper panels, Louis XV-style furniture and marbled bathrooms, is spacious and has a wonderful view of the harbour and the Palace of Monaco.

At night the harbour twinkles with the lights and reflections of the superyachts. Who knew that the Grimaldi Palace basks in a nocturnal orange glow? Breakfast at the Hermitage is in the magnificent Winter Garden set under a dreamy cupola by Gustav Eiffel.

Casino Square, a two-minute walk away, has never looked more captivating, having undergone a multi-million-pound renovation. It is now mostly pedestrianised allowing for safer selfies to be taken in front of the famous casino – the Casino de Monte-Carlo. It is possible to buy tickets to visit it, although it is ironic that citizens of Monaco are not legally allowed to gamble there.

Casino Square is ‘carparazzi’ heaven with Lamborghinis and customised sports cars jockeying for pole position outside the coveted parking spots outside the casino.

All week the Hermitage Hotel was a hive of activity as the scene of the Monaco Auction Week, where classic cars and watches, rare jewellery and a collection of Hermes handbags were auctioned in the ballroom.

There were elegantly dressed high rollers raising their paddle and being outbid by unseen telephone bidders. A 1955 Mercedes-Benz 300 SL Gullwing sold for over 1.4m. The most sought-after item was the Birkin 30 Nil Bleu Jean crocodile handbag. Despite being 17 years old and its handles having a slight discolouration, it sold for a whopping 65,000, prompting deep sighs in the room from the unlucky bidders.

The immortal words of Lady Bracknell from Oscar Wilde’s The Importance of Being Earnest sprung to mind: ‘A Handbag? For 65,000? Some people can resist everything except temptation.’

Oscar Wilde had visited fin de siècle Monaco as a friend of the first American Princess of Monaco, Princess Alice. She stood by Wilde during his trial and imprisonment, and Wilde dedicated one of the fairytales in his A House of Pomegranates to ‘H.S.H. Alice, the Princess of Monaco’. Alice was married to Prince Albert I who was a keen explorer and oceanographer. The Prince established the truly magnificent Oceanographic Museum of Monaco in 1910. Kids will love it, with over 6,000 specimens on display, including Grimaldichthys profundissimus long thought to be the deepest-living fish in the ocean. Princess Alice is credited with catching the first specimen, near the Cape Verde Islands using a fish trap Prince Albert invented.

The Museum also features a shark lagoon and aquariums, where you can come face to face with piranhas, seahorses, clownfish and stonefish with their deadly spines, and marvel at curious sea turtles. Prince Albert I passed his love of the ocean to his great-great-grandson, Prince Albert II, the current Sovereign Prince of Monaco, who is passionate about ocean conservation and hosts an annual Monte-Carlo Gala for the Global Ocean. In 2017, he presented an award to that well-known eco-warrior, Leonardo DiCaprio, in the beautifully ornate Salle Garnier, known as the jewel of the Casino de Monte-Carlo.

Prince Albert’s wife, Princess Charlene, a former Olympic swimmer, is also a water lover. I was astonished to see her in the sea racing state-of-the-art water bikes with an unlikely companion – mixed martial arts champion Conor McGregor, with whom she is embarking on a 180km voyage next month to raise awareness for water safety in aid of the Princess Charlene of Monaco Foundation. The best restaurant for a family lunch is Le Grill, perched on the eighth-floor terrace of the newly refurbished Hotel de Paris Monte-Carlo.

The panoramic view from the terrace of the Mediterranean adds to the exhilarating sensory experience. Franck Cerruti, the talented chef, works with the treasures provided by the abundant natural habitat of the Riviera.

This is best exemplified by the aptly named Menu Escapade Romantique at €65 per person – dishes include a mouth-watering Andalusian gazpacho with lightly cooked San Remo Gamberoni and duck breast cooked in a fireplace, roasted peaches and ‘dolce forte’ sauce, finished off by mountain blueberries crumble or the marvellous Hotel De Paris traditional chocolate souffle. To walk off lunch, head to the beguiling Princess Grace Rose Garden.

Those feeling more intrepid should head for Fort Antoine, an 18th-century military fortress and watchtower with a bewitching promontory position overlooking the bay.

In the summer season, it transforms into an open-air theatre space, and even though tickets are free, they need to be booked online in advance. The Fort itself was heavily damaged in World War II but was later rebuilt.

Although Monaco was officially neutral in the war, it was twice occupied by the Italian Army, but the Germans drove them out after the fall of Mussolini. After the Allies liberated the Principality in September 1944, the future Prince Rainier III joined the French Army and took part in the liberation of Alsace, and was awarded the American Bronze Star Medal for his bravery.

In 1955 the Hollywood movie star, Grace Kelly, arrived in the south of France for the premiere of The Country Girl. The late Olivia de Havilland played a real-life match-maker, setting up Grace Kelly and Prince Rainier III on a date.

There are some memorable black-and-white photos of their first date, with an official photographer in tow as the Prince showed Grace around the Palace and his private zoo in the Palace gardens, while a tiger looks on curiously at the glamorous new arriviste.

The couple married the following year, with Kelly becoming Her Serene Highness Princess Grace of Monaco. The ‘wedding of the century’ took place at the 19th century St Nicholas Cathedral in April 1956, attended by Cary Grant, Ava Gardner, Gloria Swanson and Aristotle Onassis, and watched by 30million around the globe. The marriage made the Principality world famous. The Cathedral, with its majestic white marble altar, is worth a visit. It is also the final resting place of Prince Rainier III and Princess Grace. Avenue Princess Grace, in the nearby Larvotto district, is the most expensive street in the world, located naturally enough in the most expensive ward in the Principality, where average apartment prices are $16m.

Monaco consistently ranks number one in the world for millionaire density, with over 30 percent of residents having a net worth of over £1 million, with several members of the mythical Three Commas Club, an exclusive ‘club’ reserved solely for those with a net worth in the billions.

But it’s also the location of the Principality’s most popular sandy beach – Larvotto Beach. Most importantly, it has free public access. If you fancy a day trip to Monaco, just bring your own towel, or you can hire a parasol and sunlounger from the beach club.

There are plenty of good eateries nearby including Mozza on Rue du Portier for good Italian dishes in an authentic trattoria with marble tables and red leather seats, and Maya Jah, a buzzy eatery that offers thrilling Mediterranean cuisine with oriental flavours, and is a sister restaurant to the equally excellent and popular Thai/Japanese restaurant Maya Bay, in the nearby Rocabella building.

Maya Jah is a stylishly designed restaurant, with a lively terrace and with a 22 three-course set lunch menu offers value for money.

At night, it comes into its own with a DJ setting the scene for a trendy crowd to experience a memorable meal with show-stopping cocktails and fabulous dishes where you are whisked off to the Orient without ever having to leave the Mediterranean.

In walking distance of Larvotto Beach and Casino Square is The Metropole Monte-Carlo Restaurant, in a fabulous dining room designed by Jacques Garcia and a pretty tree-lined terrace offering a refreshing Mediterranean breeze.

This mise-en-scene complements an inventive menu such as a starter of green beans ‘al dente’ in a mimosa salad with Solange Imperial caviar, or a sardine with green asparagus and lemon confit from nearby Menton, followed by blue lobster spaghetti with a spicy and coral emulsion.

This is French haute cuisine at its finest and is enhanced by impeccable and friendly service and a tempting selection of desserts from its famous trolley that will drive younger members at the table wild with excitement.

However, you’ll need to be patient if you want to eat there as it’s currently closed due to renovation work and won’t reopen until April 2022. For the final two nights, we move just beyond the eastern border of the Principality to the Green Globe-certified Monte-Carlo Beach hotel in the enclave of Roquebrune-Cap-Martin. This is a truly delightful five-star resort hotel on the sea with a private beach. It features two outstanding restaurants – the more casual Le Deck combines delicious sea-food dishes, friendly service and an unexpectedly buzzing scene that is as fun as Club 55 in St Tropez.

Elsa, on a terrace with a stupendous view of the sea, is the first organic Michelin-starred restaurant. It alone is worth travelling to, just to sample the irresistible cooking of the charming chef, Benoit Witz.

And the breakfast? The best in the Cote D’Azur, with the acai and berry porridge being particularly delicious.

Our modern suite is beautifully designed with an ocean view, a terrace to watch the spectacular sunsets, and steps to take us directly to the sea or the Olympic-sized swimming pool, complete with its dual-level diving boards.

Just down the road from the hotel is the newly reopened Cap Moderne site, featuring Le Corbusier’s wonderful Cabanon holiday cabin and the neighbouring E-1027, the influential villa built by Eileen Gray that’s perched on the Cap-Martin cliff face. The villa had been graffitied by Le Corbusier and used for target practice by the Nazis, but it has now been lovingly restored and it is an architectural joy to behold.

Even though Monaco is the second smallest state, measuring the size of Hyde Park, it is also the most densely populated country in the world, albeit with only 38,000 inhabitants. The busy streets in and around Casino Square seem like a distant memory in this stunning seaside oasis of calm. Until the mid-19th century, the Principality of Monaco was much larger and bordered the village of Eze, to the west, and the seaside town of Menton, to the east.