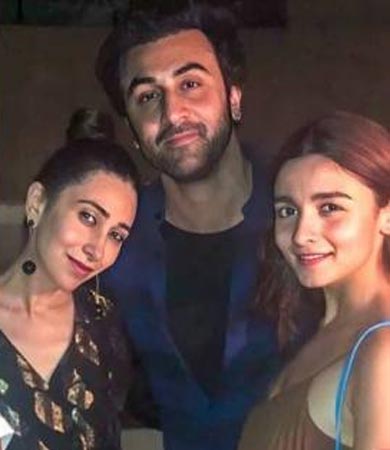 Recently, Karisma appeared on the dance reality TV show Super Dancer 4 to fill in Shilpa Shetty’s place who was the former judge on the show. During a recent episode, a little girl asked Karisma how many actors were there in her family. The actress exclaimed that there are so many and started recounting names starting from her great grandfather Prithviraj Kapoor to next-gen star Zahan Kapoor.

In the end, co-judge of the show Anurag Basu, in an attempt to pull her leg, asked that why doesn’t she add Alia to the list as well. Karisma was caught off guard, she let out a smile and made a hilarious gesture of zipping her mouth.

Alia Bhatt and Ranbir Kapoor have been dating for quite some time now and is often spotted hanging out together. Fans are excited to see when marriage will be on the cards for the couple.

Alia is often seen sharing some or other memory with Ranbir on her social media account. Recently, she shared her 40-day challenge selfie, and it has number 8 written on its phone’s cover.

Well, her boyfriend Ranbir’s favourite number is 8. His obsession with the number is known to all. From his car to his football jersey sports the same, all of them have the number 8 on them or numbers which add up to 8.

On the work front, Alia is correctly shooting for her upcoming film Darlings.

Apart from that, she will be next seen in Sanjay Leela Bhansali’s ‘Gangubai Kathiawadi’, SS Rajmouli’s ‘RRR’ and Karan Johar’s multi starrer magnum opus ‘Takht’.