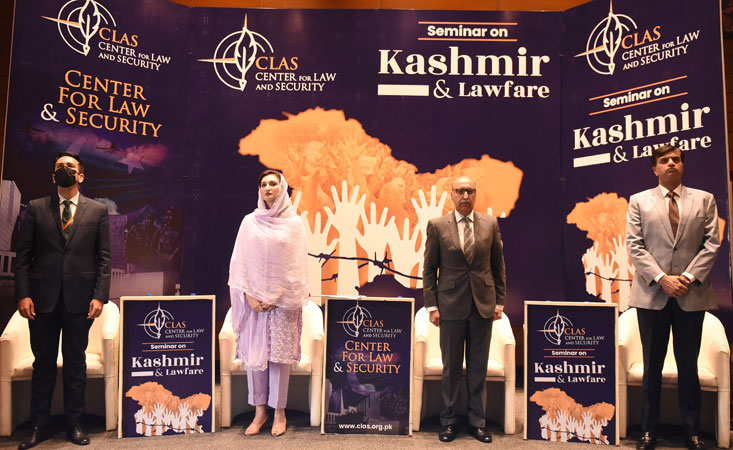 Center for Law and Security (CLAS) held a seminar on “Lawfare and Kashmir” on the occasion of Youm-e-Istehsal in Thursday at the TMUC Islamabad.

Rehman Azhar, Executive Director, CLAS started the discussion by highlighting the legal significance of Indian actions on August 05, 2019 and the way India is trying to change the dynamics of Kashmir dispute through the use of lawfare. Pakistanis and Kashmiris have a strong legal case and after August 5th 2019, this case has become even stronger.

Maleeka Bokhari, Parliamentary Secretary for Law and Justice mentioned how Kashmiris have faced curfews, lockdowns and torture by India. She said that India’s lawfare hasn’t been limited to Kashmir only. She praised the Ministry of Foreign Affairs as they presented the case of Kashmir in an exceptional manner. She discussed a new government approach under the leadership of the Prime Minister Imran Khan to explore all legal aspects of the Kashmir issue and created a comprehensive policy keeping in view all aspects of Kashmir and international law.

Mohsin Kamal, Director Legal Affairs, Ministry of Foreign Affairs discussed the United Nations Security Council Resolutions which mention that the Kashmir issue is to be solved in accordance with the wishes of the Kashmiris. He said that there are International Resolutions which support Pakistan’s stance. Pakistan needs to use them, they can’t leave them on the stands. It needs to take the matter to the relevant legal forums and take a legal position. He said that Pakistan needs to go to these international forums to keep momentum of Kashmir cause. Pakistan also needs to invest in lawfare to use it politically and diplomatically.

Ambassador Abdul Basit, former High Commissioner to India said that Indian actions on August 5 were not sudden. Pakistan should have anticipated and prepared well to counter it. He stressed that Kashmir is not a political issue for one party, it’s a collective national issue. Pakistan’s legal case is very strong but it is weak at the diplomatic front. Without diplomacy, lawfare will go nowhere. People of Kashmir are giving sacrifices, no matter what India does, they can never win the hearts of the Kashmiris.

Oves Anwar, Director Research, Research Society of International Law mentioned that lawfare is a substance of diplomacy. India has closed every opportunity to resolve the issue of Kashmir. Pakistan needs to build the right narrative regarding lawfare. He stressed upon the fact that Pakistan needs international law capacity which has been missing for decades.

The session was followed by a question and answer session which focused on the way forward for Pakistan in terms of Kashmir and lawfare and what steps needed to be taken in order to build a cohesive narrative regarding Kashmir. Concluding remarks were delivered by Rehman Azhar who thanked the audience and panelists and also presented the panelists with shields.