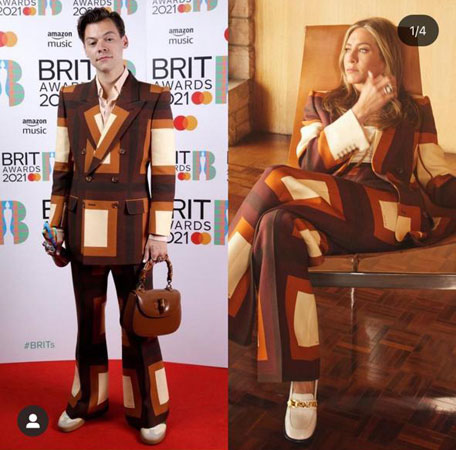 Jennifer Aniston was seen sporting a colourblock pantsuit for American fashion magazine InStyle, and many eagle-eyed fans instantly recognised it as the same outfit that English singer Harry Styles wore during the 2021 Brit Awards ceremony.

Aniston wryly acknowledged the alikeness through her Instagram stories. She shared a post by a fashion writer called Evan Ross Katz and wrote, “Just call me Harriet Styles.”

People magazine reports that this is not the first time Aniston and Styles have twinned. In another story shared by Aniston, both can be wearing the exact same white T-shirt on which the text “Save the Drama for Your Mama” is printed.

The said piece of clothing was first worn by Aniston when she was playing her character Rachel Green in the iconic sitcom. Styles, a self-confessed fan of Aniston, sported the same T-shirt later.

Aniston, meanwhile, recently appeared in the unscripted Friends Reunion episode in May. In India, it streamed on ZEE5.

Fans of both artistes reacted on social media after Aniston shared the Instagram stories.

One other wrote, “Harry said Jennifer Aniston was his first celebrity crush so I bet he is loving this right now.”

Another Twitter user agreed, and wrote, “i just know harry is happy and freaking out about jennifer aniston wearing the same suit as him.”