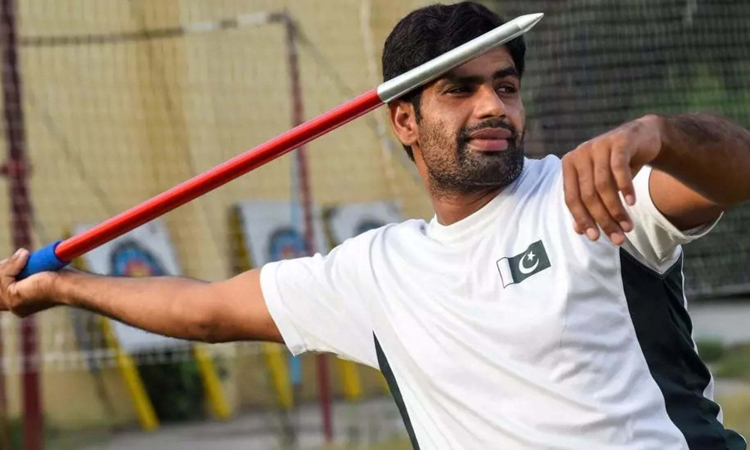 LAHORE: Pakistan’s Asian Games bronze medallist Arshad Nadeem became the first athlete from the country to book his place in the Olympics final as he topped Group B of the javelin throw event with a 85.16m throw in Tokyo on Wednesday. The 24-year-old is among the top 12 javelin throwers now who will compete for the medals in the final on Saturday (tomorrow). The athletes were to throw at least 83.50m to advance into the final or finish among top 12 competitors over all. In his first attempt, the 24-year-old Pakistan athlete could reach the 78.5m mark but in the second attempt, Arshad created history with a throw of 85.16m that also placed him on top of Group B. This was overall the third-best throw in the contest after India’s Neeraj Chopra (86.65m) and Germany’s Johannes Vetter (85.64m). This is also Arshad’s third-best throw in a competition.

Earlier this year, Arshad threw the javelin to a distance of 86.39m for his personal best and a national record during the Imam Reza Championship in Iran. Earlier in 2019, he threw 86.29m at South Asian Games in Nepal. So, one can safely say that Arshad’s best is yet to come and hope that the best comes at the final on 7th August, which is scheduled to commence at 4:00pm Pakistan time. Pakistani athlete will also have his eyes on a medal on Saturday as he’s being considered as a potential hope to end the country’s Olympic medal drought. Arshad is the last athlete to be performing for Pakistan at the Olympics in Tokyo, hoping to get a medal and break the country’s 29-year-old medal-drought in the Olympics. Pakistan took their last medal in Olympics in the 1992 Barcelona Games.

Speaking to the media after qualifying for the final, Nadeem said he was thankful for the support given to him by Pakistanis. He also appealed to the nation for more prayers so that he can given a stellar performance in the final. The athlete also thanked his coach for his tireless efforts in training him for the Olympics. “We will keep performing like this,” he said, ending with an emphatic “Pakistan Zindabad”.