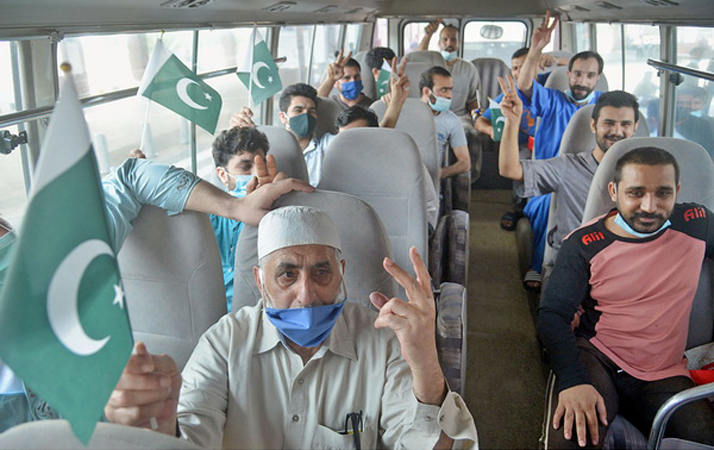 The 28 Pakistanis, who were imprisoned in various Saudi jails, have been released by the royal decree of Crown Prince Mohammed bin Salman after Prime Minister Imran Khan asked the Crown Prince for clemency during the former’s Pakistan visit in 2019.

Talking to the media men, Senator Ijaz Chaudhery said it was a moment of immense pleasure for the PTI government that 28 Pakistanis imprisoned in various Saudi Arabian jails have returned to their homes, adding that another 62 Pakistani prisoners had already reached the country before Eid ul Azha.

To a question, he said, “These Pakistanis will reunite with their families due to the untiring efforts of Prime minister Imran Khan”, adding that the Pakistan government was thankful to the Saudi government for the release of these Pakistanis.

Overseas Pakistanis Foundation (OPF) officials, who were also present on the occasion, arranged a breakfast for the freed-Pakistanis after they came out of the lounge after coronavirus testing.

The Pakistan government bore the travel expenses of the 19 Pakistanis while the rest of the nine paid for themselves. The returning Pakistanis hail from different parts of the country including Mehmand Agency, Lower Dir, Sialkot, Swat, Kurram Agency, Charsaddah, Hangu, Mardan, Abbotabad, Peshawar and Larkana.

Talking to APP upon their arrival, one of the released priosners Siraj Khan of Lower Dir said it was a long tale of hope and despair but Prime Minister Imran Khan became their messiah and made their release possible.

“I am in the seventh heaven on returning to my homeland”, said Ghulam Murtaza of Larkana who profoundly thanked Almighty Allah and expressed his gratitude for premier Imran Khan for the kind initiative.

His eyes brimming with tears, Safdarullah Bacha of Charsaddah said his family was indebted to the PTI government for paying for the fines and other liabilities to make his return to his family possible. He said he was excited to return to his native city after a lapse of several years.