* Brivati sets out to challenge the widely-held view propagated and pushed by western media and the Wall Street Journal in particular, which reaches its climax in yet another book 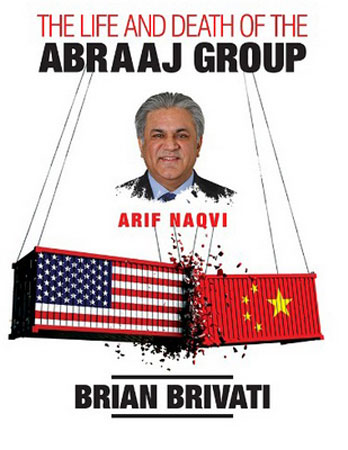 It is rare that a book can combine dry and academic factual rendition with biographical and human insights that in turn, act as a thriller you cannot put down, wonder at the way in which the world really works and finally, clear conclusions that make the reader ponder as to when Pakistan will emerge from the endless cycle of betrayal and self-interest and evolve towards a nation that defies its stereotype in the west, and rather than seeking to project a softer image, actually stands up for its citizens and rights in the international arena.

“Icarus: The Life and Death of the Abraaj Group” by Professor Brian Brivati, a renowned academic historian in England focussed on human rights has written such a book. It is full of tiny gems, such as quotations from leaders of the past which are rarely heard these days, such as Humphrey Bogart saying, “You’re not a star until they can spell your name in Karachi”, or Margaret Thatcher’s famous slip when she described non-white people as not being “One of Us”.

Brivati sets out to challenge the widely held view propagated and pushed by western media, and the Wall Street Journal in particular, which reaches its climax in yet another book due to be released this month by the journalists who made this story into a life mission towards wealth and fame, talking about movie rights and Netflix series, which is “The Key Man: How the Global Elite was duped by a Capitalist Fairy Tale”, by Simon Clark and Will Louch.

Brivati emphatically debunks the hypothesis in The Key Man, because that book relies on there being an evil genius masterminding the theft of hundreds of millions of dollars with willing accomplices – which was over the last three years been pushed hard, as we have seen, by the Wall Street Journal by the authors themselves. It is also supported by the narrative in the DoJ’s ‘Al Capone’ indictment.

Brivati emphatically debunks the hypothesis in The Key Man, because that book relies on there being an evil genius masterminding the theft of hundreds of millions of dollars with willing accomplices — which was over the last three years been pushed hard, as we have seen, by the Wall Street Journal by the authors themselves

Brivati sums up their approach as: “There are fatal flaws in this explanation. There is no substance in the way the actions of the players are described. These are conspirators who do not conspire. They have large meetings and discussions about cash flow. These conspirators then throw open their books to multiple investigations in which all transactions are faith- fully recorded. There are fraudsters who do not commit fraud. A small number of US investors questioned the management of a fund and, rather than assert their own legal rights, Abraaj returns everyone’s money with interest because it fully intended to carry on working with those investors in the future. There are thieves who do not take their full legal entitlement for salary and carried interest. Thieves who were so good at what they do that investors are still making money from their investments today and no money ever went missing. These racketeers who, at the moment their company was liquidated, had not left a hollowed-out shell but a company with assets that were worth more than the claimed liabilities. All working for an evil genius who used the money he had not already given away through his philanthropy and all his energy and ingenuity to first try to save the company and then get the creditors paid back. The Key Man account includes details of the millionaire lifestyle Naqvi led and innuendos about his personal life and that of his colleagues in terms of their extravagant behaviour, their lifestyles, cars, vacations and assets. It is the tabloid version of this story and, whilst it is entertaining, it does not really address the key issue……………. The thesis in The Key Man is in essence a fall guy thesis, which just does not stand up to scrutiny. This was not a suicide pact; it was an assassination”.

In today’s world of assassination by social media and fake news, this is a bold and damaging assertion for which the author having taken a stand against the prevailing narrative needs a pat on the back. The book is at times sad to read, at times it provokes anger at the naivety of the key players but at all times, it is astounding in terms of the wealth of detail. As a writer of fact not fiction, I am most thrilled by the accompanying website, which the author invites you to peruse in concert with reading the book, which contains all the factual written and video media that support his argument and can be found at www.abraajbook.com and in addition, contains a wealth of other pertinent information that will make the job of subsequent researchers more compelling as well as the promise of subsequent blogs and updates. This makes me understand the motivations behind the writing; this is not sensationalist nor written as a spin, nor to convince the reader of how clever the narrator is. It is the bread-and-butter approach favoured by authors who subscribe to the most priceless epithet around writing bravely, which is “publish and be damned”. I have not heard of a year-long campaign of advance rhetoric and Wall Street Journal supported innuendo as the other book has sought to do, clearly for commercial gain. Sadly, in today’s world, sensationalism and the sound bite are what sells. But authoritatively argued works by respected academics occupy a space of their own.

I received this book in manuscript to review and/or point out factual errors as countless other journalists, academics and businesspeople did, sourced by a variety of mediums including past writings, LinkedIn pages and Facebook. The intent was clear, write and review as you wish, whereas the other book, with a clearly defined agenda has a very cleverly curated set of reviewers who seem to all come from that part of the world, certainly not from “One of Us”. In itself, I find it an affront for so much of the narrative being about Pakistan and Pakistanis and yet the review process ignored getting advice from those for whom the books content has as much to do with our DNA and identity and stereotyping that it would have been nice to have been consulted as well.

This is where Brivati’s well researched piece comes into its own. Authoritatively and based on a compelling review, he asserts: “Abraaj was ultimately destroyed because of the rise of economic nationalism in an increasingly isolationist US administration. This was part of the widespread populist rejection of globalisation and integration and can be seen around the world, notably for example, in the UK’s vote to leave the EU. But it is also the story of competition within the private equity industry itself between the established and the emerging; between the old way and a new way of deploying private equity – an idea that is itself the subject of a power play between superpowers. What it is not is a simple reimagination of the Bernie Madoff story with Robert de Niro in the title role, or the 1MBD scandal dramatised in the Pulitzer Prize-winning Billon Dollar Whale. The DoJ is an extension of US foreign policy and the use of the press is a routine feature of these cases. This strategy was popularised by none other than Rudy Giuliani during his time as US Attorney for the SDNY. Press briefings and media have been utilised as an extremely effective tool by prosecutors, drawn on when needed. To the average person, countries do not get involved in stopping transactions; well, for the US, such an approach is a tool of foreign policy and corporate history is replete with such examples, especially in nations where the superpower tussle is often balanced on a knife’s edge like Pakistan”.