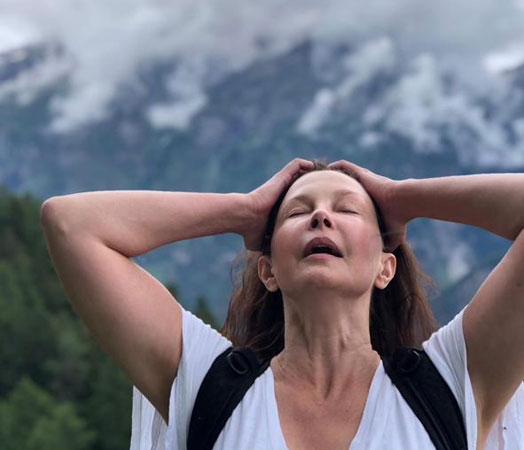 Not even a major leg injury was going to keep Ashley Judd from trying to climb every mountain! The esteemed actress recently took to Instagram to offer an exciting update about her health: She’s walking again. Ashley’s latest achievement comes almost six months after she revealed that she severely injured her leg during an excursion on the Congo rainforest.

What’s more? The 53-year-old star, who has been documenting her road to recovery, isn’t going on just any regular walks either. She shared footage of herself going on a hike at the Swiss National Park in Switzerland.

“Dear Friends, It is with reverence and quiet awe I offer this update,” she began her caption on Sunday, Aug. 1. “Today, five months and three weeks after the accident in the Congolese rainforest, I walked again and in what fashion!”

The Kiss the Girls star shared more details about her hike, writing, “Stepping in, I felt in my ease, my natural garment of self, at home in my spirit. My leg and foot, worked beautifully.”

‘Dear Friends, It is with reverence and quiet awe I offer this update,’ she began her caption on Sunday. ‘Today, five months and three weeks after the accident in the Congolese rainforest, I walked again and in what fashion!’

It was no small feat, as Ashley explained that she “walked up hill on uneven surfaces for an hour confidently and came down carefully and easily.”

“I rested in a meadow on God’s fecund earth for hours,” she added. “The next day, I walked again on a high Alp in #Ticino, working hard and feeling how much I stamina I have to rebuild. This is the road ahead. But I am up to the daily tasks, as I am even carrying firewood into our Alpine hut!”

In addition to sharing her accomplishment, Ashley thanked those who have helped her “make my recovery possible,” including Dr. Phil Kregor, “the trauma orthopaedic surgeon.”

“He, in consultation with of Dr. Susan Mackinnon & Dr. Scott Levin, made a very gutsy decision to decompress my deeply damaged peroneal nerve,” she explained. “The video of my foot moving is unheard of. We expected my foot – if ever – to *begin* to move in one year.”

She continued, “In four months to the day, she went blew us all away. Now, after crying while trying to spell the ABCs with a paralyzed foot….well, you see!”

The Double Jeopardy actress revealed that her leg “will never be the same” but she’s accepted the new version she’s working with.

As she put it, “She is a new leg. And I love her. We are buddies. We have a come a long way and we have a fabulous life ahead.”

She concluded, “Many of you have been praying for me, and sending me notes. Thank you. I have felt you. I have especially been held by family and my partner. Peace be with you.” Back in February, Ashley revealed she suffered a “catastrophic” leg injury while on an excursion in the Congo rainforest. While out and about, she tripped over a fallen tree in the dark. The star was originally in the area with a research group that was studying an endangered species of apes called bonobos.

“Without my Congolese brothers and sisters, my internal bleeding would have likely killed me, and I would have lost my leg,” she shared at the time. “I wake up weeping in gratitude, deeply moved by each person who contributed something life giving and spirit salving during my gruelling 55-hour odyssey.”

She previously shared that she experienced “trauma in my body as well as my soul with equal proficiency.”

But it looks like she’s back to walking to the beat of her own drum!