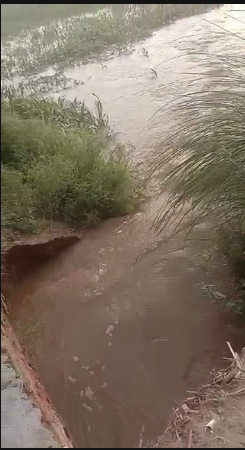 Lahore: Lahore’s suburb area, Manga Mandi, where a big chunk of fertile land has been completely destroyed due to a collapse of a protection bund. The bund was setup to resist the excessive flow of  water in the crop fields. It is believed that the protection bund collapsed due to poor maintenance by the irrigation department. 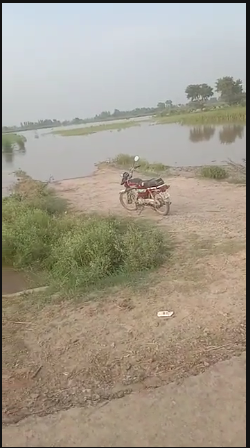 Talking to the MPA Saba Sadiq, she stated that she has visited multiple offices of the concerned administrative authorities but no action has been taken yet. Neither the administrative officers were responsive nor it was possible to do it solely with community financial contribution. She further stated that the matter should be taken up as the residents of the affected area were already going through mental trauma as well as difficult conditions to live in.

Taking to one of the affectees of the area, who tried contacting the authorities to report them the spill, he stated that Secretary Irrigation, Commissioner Lahore, XEN Irrigation Deputy and Assistant Commissioner Raiwand were approached while no immediate action has been taken so far, as the belongings worth millions owned by the residents, leads to more loss.

In the meanwhile, AC Pattoki Osama Niazi, on the orders of Commissioner Lahore sent his team to visit the affected area. Osama Niazi and his team assured full support to temporarily resist the river water flow and guaranteed complete support in terms of funds and reconstruction of the bund.  Osama further stated that ” The Ravi lies on western Side of Patoki Tehsil. Due to rainfall these days, following small areas on the riverine belt have received water. Irrigation Department has said its not even low flood.”, he added. He also stated that people did cultivation in these riverine areas; (the inhabitated area is quite far away including  Nathay jageer, Nathay khalsa, Kamogil, Jugian Natha singh and Lakhan Kay. He further stated that, every year water accumulates in these inhabited riverine areas.Nonetheless, we have sent machinery and teams to aid the people.

Bund is responsibility of Irrigation department and atleast its project of 150 million rupees and shall be approved in ADP by next year, he maintained. In his closing remarks he categorically stated that the area falls in both Raiwand and Patoki. When contacted with AC Raiwand Adnan Rashid, he said that the area does not fall in his jurisdiction and he might not be able to help the residents in this regard.

On trying to contact the concerned officers, XEN irrigation Amir stated that they had no bund in the particular area while the water spill in the area is supposed to be a ‘natural phenomena’. He also added that his department is awaited for the the orders of the authorities  for action, while the funds would be generated from PDMA.