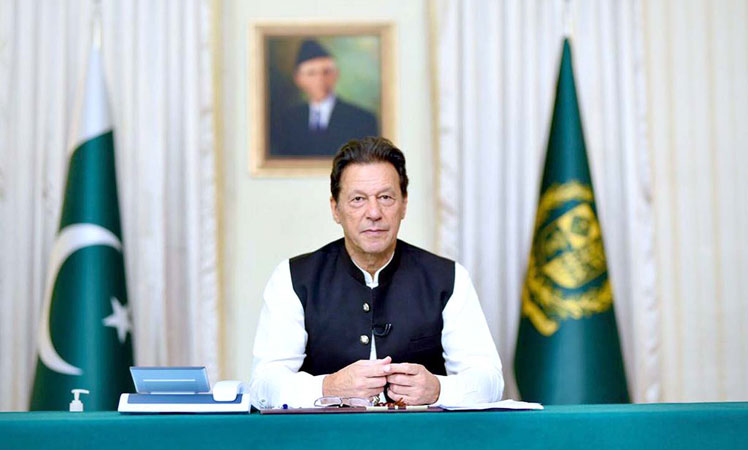 Prime Minister Imran Khan on Sunday said that enforcing lockdown was a good decision as it would reduce spread of Covid-19 but the issue which should be considered is whether such a decision can save the country, its people and economy.

“Imposing complete lockdown would increase hunger. Never go for lockdown unless you have answers for these issues,” he said while conversing with the people in a live question-and-answer session via telephone.

The prime minister referred to situation in India where the abrupt lockdown caused destruction. The government there only thought of the upper and elite classes. He suggested that smart lockdowns could be imposed on areas identified as hotspots and schools should not be reopened unless all the teachers were vaccinated. “We do not want to damage our economy by imposing a lockdown […] we took the right decision by imposing smart lockdowns.”

Prime Minister Imran Khan said that a corrupt society cannot make progress whereas those countries made economic strides that had eliminated this curse from their societies. He said there was rule of law in the prosperous countries. “Corruption at the low level did not bankrupt a country, it has always been the ruling elite that ruined the countries through their teeming corruption,” he added.

He said in order to save their skins, the corrupt junta would first weaken the anti-graft bodies, resulting in the destruction of a country.

The prime minister termed the government’s efforts against corruption and for the rule of law as ‘the biggest Jihad’. He said there would be no two separate sets of laws for the powerful and for the poor. The prime minister asked the people to fully cooperate with the government in this regard as they wanted to make the people free from the clutches of injustices. “We want the country to stand on its feet. It should not seek loans or beg for assistance, and should not take part in the other’s war in return for money,” he added.

The prime minister said the powerful corrupt elements wanted NRO and wanted deal as the one extended by Musharraf. Such elements had been blackmailing that otherwise, they would pull down the government.

The prime minister referred to chaotic situation in South Africa where authorities took action over Zuma’s corruption, their former ruler. He opined that in the Western democracy, an accused could not resist accountability.

The prime minister said two families have accumulated pelf through corruption. For the first time in the country’s history, NAB had arrested the powerful people, he added. He said that the first principle in the Riasat-e-Madina was the rule of law where even the Caliphs were answerable to ordinary people.

The prime minister also regretted that the past rulers had ruined government entities like PTV, WAPDA and others through nepotism and political inductions. The result of political inductions added to ballooning of pension bill as the budget allocated for different entities went to payment of pensions. So the institutions could not work for the achievement of the purpose for which they had been created, he observed.

The premier also spoke of the Noor Mukadam murder case, saying that he has been closely following the investigation since the beginning, adding that the incident was a very tragic one. “I must reiterate that no matter how powerful the assailant’s family is or whether he is a US national, he is not going to be spared if found guilty,” he said.

He also spoke about the matter of the Afghan ambassador’s daughter’s alleged kidnapping and said that he took personal interest in the case as if she was his own daughter. “I commend the police for the job they did in the case,” the premier said.

Speaking about the July 25 Azad Jammu and Kashmir elections, he said the “umpires” and the sitting government belonged to the PML-N; the police and the election staff were also chosen by them. “Given all this, how [can it be said] the elections were rigged?” The premier said Sialkot was the party’s stronghold, but they lost the by-election there as well, adding that the only way to eliminate rigging was EVMS.