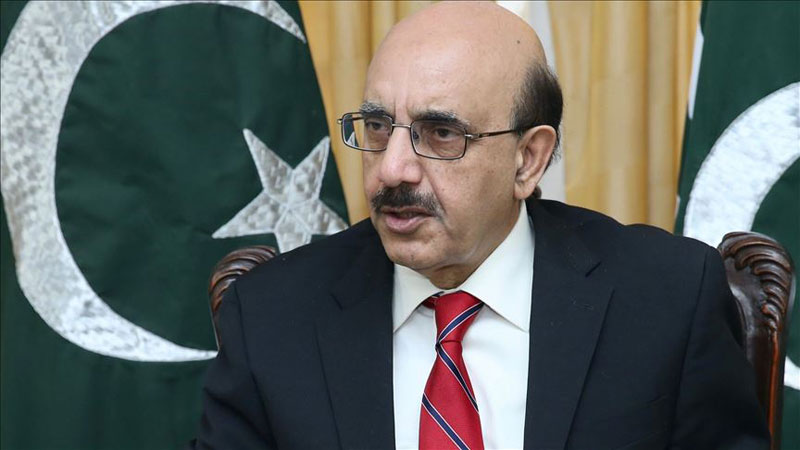 Terming Ghazi-e- Millat, Sardar Muhammad Ibrahim Khan as a towering political leader, a trailblazer freedom fighter and dynamic personality in the history of Kashmir, AJK President SardarMasood Khan pledged to carry forward his mission to liberate Kashmir from Indian subjugation and make it a part of Pakistan.

He expressed this resolve while speaking as Chief Guest at All Azad Kashmir Inter-University Declamation Contest organized by AJK University in Muzaffarabad city on Saturday.

The event was dedicated to founding President of Azad Kashmir Sardar Muhammad Ibrahim Khan, whose 18th death anniversary was observed across AJK on Saturday, the AJK President office said Saturday.

AJK President was candid about the reasons why Ghazi-e- Millat was the tallest among his contemporaries and said that after getting early education in Kashmir and Pakistan and higher education from England, Sardar Muhammad Ibrahim Khan started his outstanding career as the youngest member of the PrajaSabha under Maharajah Hari Singh, then ruler of Jammu and Kashmir.

Khan said it was Sardar Muhammad Ibrahim who had mobilized all political forces of Kashmir and hosted an important meeting at his residence in Srinagar on July 19, 1947, to craft a consensus on the future of the state of Jammu and Kashmir. The meeting ended after passing a unanimous resolution calling for Kashmir’s accession to Pakistan.

The President said when the government of Maharaja Hari Singh decided to arrest Sardar Muhammad Ibrahim Khan for his political activities, he traveled incognito from Srinagar to Muzaffarabad and then Murree and declared a war against Maharaja Hari Singh’s forces that led to the liberation of the one-third of Kashmir, now called Azad Jammu and Kashmir.

“Had India not landed its forces in Srinagar and occupied a part of Jammu and Kashmir in October 1947, the entire state of Jammu and Kashmir would have been liberated under the leadership of Sardar Muhammad Ibrahim Khan, who later became the founding president of AJK at the age of 32 years.

AJK President also paid great homage to other leaders of Kashmir freedom movement, including Raees-ul-AhrarChaudhryGhulam Abbas, Sardar Muhammad Abdul Qayyum Khan and advised the young students to study the life and role of our leaders like Sardar Muhammad Ibrahim Khan because he was an icon and role model for the new generation as four times President.

He went on to say that Ghazi-e- Millat during his lifetime persuaded the goals of the right to self-determination of the people of Jammu and Kashmir as well as rule of law and good governance in the liberated territory.

Speaking on the occasion, Vice-Chancellor University of Azad Jammu and Kashmir, Professor Dr Muhammad KaleemAbbasi said that the late Sardar Ibrahim was an undisputed hero of the liberation movement who launched the freedom struggle in 1947 and besides being founder president, served Azad Kashmir as president three times.

The Vice-Chancellor urged the young students to not only keep the candle of freedom burning bright but also pass it on to the next generation and continue their struggle to achieve the goals set by Sardar Muhammad Ibrahim Khan, Sardar Muhammad Abdul Qayyum Khan and other early leaders of the freedom movement.

Earlier in the inter-university speech competition, students of University of Science and Technology Mirpur, University of PoonchRawalkot, University of Kotli, Women’s University Bagh and Azad Jammu and Kashmir University Muzaffarabad in their beautiful speeches spoke about the natural beauty of Azad Kashmir, its tourist importance, and highlighted various aspects of introducing Kashmir’s culture and civilization to the world through cricket matches from the platform of Kashmir Premier League in the coming days.