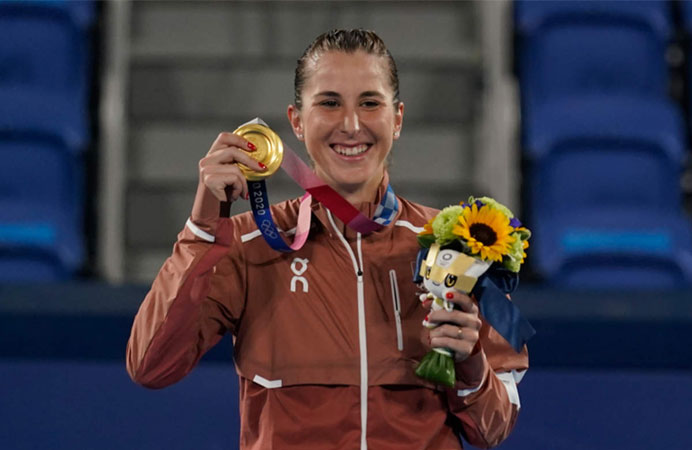 TOKYO: Belinda Bencic became the first Swiss woman to win the Olympic tennis singles title with a battling three-set victory over Czech MarketaVondrousova on Saturday.The 24-year-old Bencic edged out Vondrousova 7-5, 2-6, 6-3 on her second match point, with the final finishing at 11:28 pm local time (1428 GMT) after two-and-a-half hours on court.Bencic will also play in Sunday’s women’s doubles final alongside ViktorijaGolubic against Czechs BarboraKrejcikova and KaterinaSiniakova.She is looking to become the fourth player to win singles and doubles golds at a single Olympics, after Serena and Venus Williams and Chilean Nicolas Massu.The ninth seed is the first Swiss to take singles gold since Marc Rosset at the 1992 Barcelona Games.It is the biggest victory of Bencic’s topsy-turvy career.Bencic appeared to have a big future ahead of her when she reached the US Open quarter-finals as a 17-year-old in 2014. But she struggled with injuries and slipped out of the top 300 in 2017.She fought back impressively and reached a career-high ranking of fourth last year shortly before the Covid-19 pandemic hit, but has failed to win a WTA title since.It was a disappointing loss, though, for the 22-year-old Vondrousova, who was also beaten in the 2019 French Open final, after belying her ranking of 42 with wins over Naomi Osaka and ElinaSvitolina en route to the gold-medal match.She fell just short of becoming the Czech Republic’s first Olympic tennis champion.