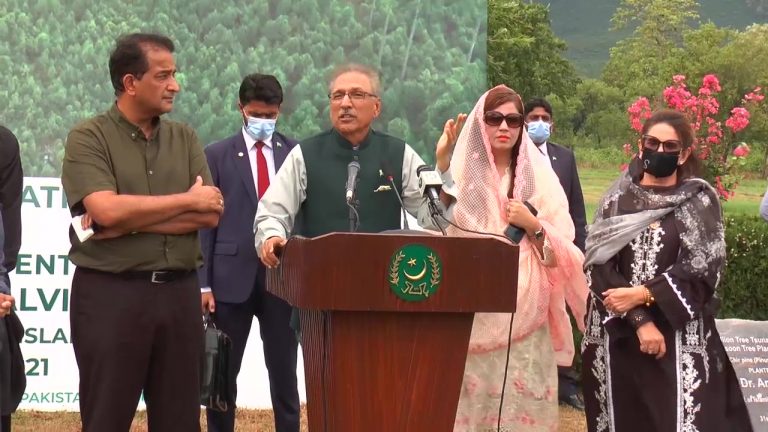 Addressing a ceremony of monsoon tree plantation drive held here at the green area adjacent to Aiwan e Sadr, the president said the onus to keep the environment clean and green now rested on the young generations and expressed the confidence that they would carry this burden and secure the country’s future.

He stressed upon adoption of environment friendly habits at the country’s scenic and tourists’ spots by properly disposing trash and garbage.

On the occasion, the president along with Begum Samina Alvi also planted saplings of Chir pine (Pinus Roxburghii) in the monsoon season under Ten Billion Tree Tsunami programme.

The president observed that young generations had to play a real role in the tree plantation drive as it had always been the young people that changed the future course of different nations.

Sharing his past experiences prior to becoming the president, he said that they had distributed 100,000 saplings among different households of Karachi, besides, they also gave away 100,000 seeds laden pencils among the younger students asking them to plant them in pots, so that plants could sprout out as part of their activities to create motivation.

The president noted that human footprints had proved heavy on nature as the indiscriminate use of pesticides and insecticides had already eliminated a large number of insects which played a vital role in the pollination process.

He also lauded efforts of the both ministers in spearheading the tree plantation drive.

The president said the government’s efforts and strategy over Covid 19 and tree plantation drive had proved very successful and acknowledged by the world.

He also underlined the need of keeping tourist spots in Khyber Pakhtunkhwa and Gilgit Baltistan clean and green as recently, these places had attracted millions of tourists.

He said that about 500 million seedlings would be planted across Pakistan as a target set for monsoon plantation under 10BTT.

In order to support the government’s tree plantation drive, students from various educational institutions volunteered to plant almost 10,000 saplings inside the presidency’s premises to increase the forest cover of the country.