* Government offices in province will be closed from next week
* Those who do not get vaccinated will not get their salary after Aug 31
*All markets but pharmacies and groceries will remain closed
* Inter-city transport banned; exams cancelled during lockdown period 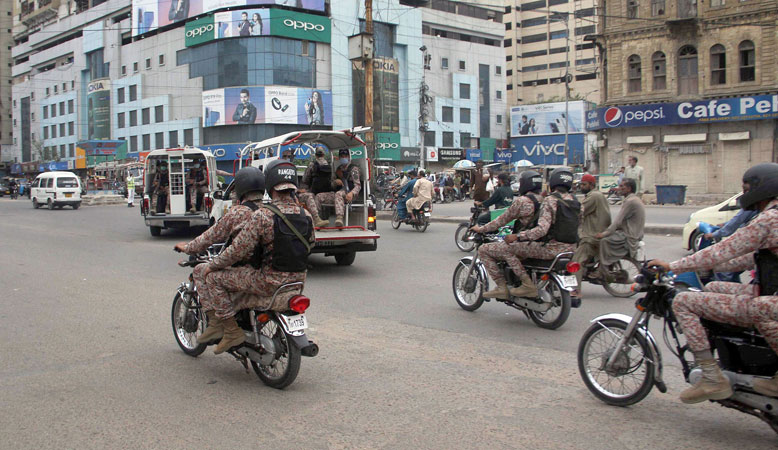 The Sindh government on Friday decided to impose an immediate lockdown till August 8 as the province continues to battle the dangerous surge in Covid-19 infections. The curbs go into effect on Saturday (today).

A meeting chaired by Sindh Chief Minister Murad Ali Shah of the coronavirus task force was held, attended by provincial ministers, medical experts and representatives of the Pakistan Medical Association. For the first time, parliamentary leaders of political parties were also invited to the Covid-19 task force meeting. The Sindh Ranger DG was also invited.

As the lockdown goes into effect from today, government offices will remain closed from next week. Those who do not get vaccinated will not get their salary after August 31. Vaccination cards of anyone roaming the streets will be checked.

The export industry will, however, remain open. All markets in the province will remain closed, but pharmacies will stay open. The inter-city transport will also be closed.

The Sindh health department had proposed a two-week lockdown to the task force, while medical experts had proposed a two-week ban on inter-city transport. A proposal was also made to close all educational institutions and educational activities for two weeks. The National Command and Operation Centre had opposed the idea of a complete lockdown in Karachi and the head of the NCOC, Asad Umar, had said that closing the entire city for weeks is not a cure. The Sindh government, however, had said that it does not care what the federation says and that the only immediate solution to bring down virus cases was a lockdown.

Addressing a press conference to detail the decisions, Chief Minister Murad Ali Shah said due to the decisions taken by the provincial task force, Sindh was able to tackle the first, second and third waves of Covid-19 relatively better than other provinces. “But in this fourth wave, the Delta variant is the main concern,” he added. He noted that Karachi is the most affected city now, saying the virus spread fast in closed spaces and cases would multiply if measures were not taken to curb it. “Just a month ago, there were an average of 500 cases daily in Sindh by the end of June. And now by July’s end, the number of daily cases has increased to 3,000,” he said.

The national tally of active Covid-19 cases was recorded at 62,723 on Friday as 4,537 more people tested positive for the deadly virus and 1,489 people recovered from the disease. Eighty-six patients died on Friday, 82 of whom were under treatment in hospitals and four in their respective quarantines or homes, according to the latest update issued by the NCOC.

There were 3,117 Covid infected patients under treatment in critical condition with 33 of them admitted during past 24 hours in various Covid dedicated healthcare facilities of the country. The national Covid positivity ratio on Friday was recorded at 7.23 percent.

Meanwhile, Minister for Information and Broadcasting Chaudhry Fawad Hussain on Friday said the Sindh government would not be allowed to impose a complete lockdown in the province as the federal government’s policy in this regard is crystal clear.

The Supreme Court had also ruled that the provinces could not make unilateral decisions in this regard, he said in a statement while commenting on the Sindh government’s announcement regarding imposition of the lockdown.

Fawad said under Article 151 of the constitution, Pakistan is a single market with the port of Karachi as the jugular vein of its economy. Any move, which would affect the country’s economic lifeline, could not be allowed, he added.

He said the option of complete lockdown was not available to any province. The policy regarding the Covid pandemic was given by the Federation, and the NCOC and the provinces were bound to implement it, he added. He said Pakistan had fought hard against the coronavirus, and the government had so far managed to save human lives, with a stable economy. He said Prime Minister Imran Khan is of the view that the complete lockdown would severely affect the working class, and daily wage earners. Had the Sindh Government implemented the SOPs effectively, the coronavirus situation in Karachi would not have been serious today, he said. The Sindh government has been given a clear message that unilateral decisions could not be taken and the guidelines of NCOC must be implemented, he added.