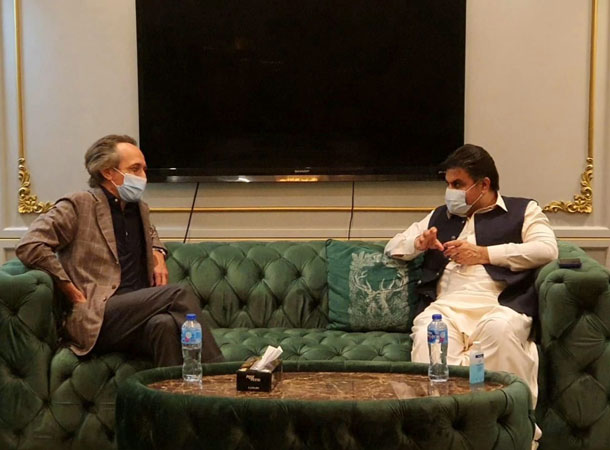 The local government minister lauded the cooperation of United Nations and assured that the Sindh Government is keen to further strengthen the partnership to ensure the provision of basic services to the people of rural areas.

He added that Sindh government was endeavoring to provide potable water across the province, and urged UNRCHC to provide technical assistance and guidance on water related projects. “Sindh Government is prepared to implement the recommendations of UN”, the minister remarked.

UNRCHC Julien Harneis said that Sindh government should focus on providing clean drinking water in rural areas as vast areas lack the facility of potable drinking water and told that he visited Umerkot and Tharparkar the other day and checked the quality of water being supplied.

He added that not only the provision of clean water is need of the hour, but treatment plants require proper management. He lauded the services of PPHI and Sindh Education Foundation for health and education services in rural areas and advised that such approaches are required for managing the water supply schemes also.

Parliamentary Secretary Health MPA Qasim Siraj Soomro taking part in the discussion informed the UNRCHC that approach of PPP leadership on development of rural areas was crystal clear adding that more than 700 reverse osmosis plants were installed in Tharparkar to cover the scattered population in remote areas of the district.

He further added that mega projects of water supply to Achhro Thar of Sanghar district has been completed by laying pipeline from Khipro to border areas.

He said that modern methods have been adopted in water supply schemes of various villages in Umerkot to address water contamination issues.

He mentioned that latest techniques have also been followed in water supply schemes of Umerkot city because the old distribution system in the city has caused contamination which needs to be addressed.

Soomro said that potable water is the primary demand of the people of Sindh. There are more than 130000 villages and it is a huge challenge for Sindh Government as it is facing scarcity of funds but the administration is committed to complete this task.