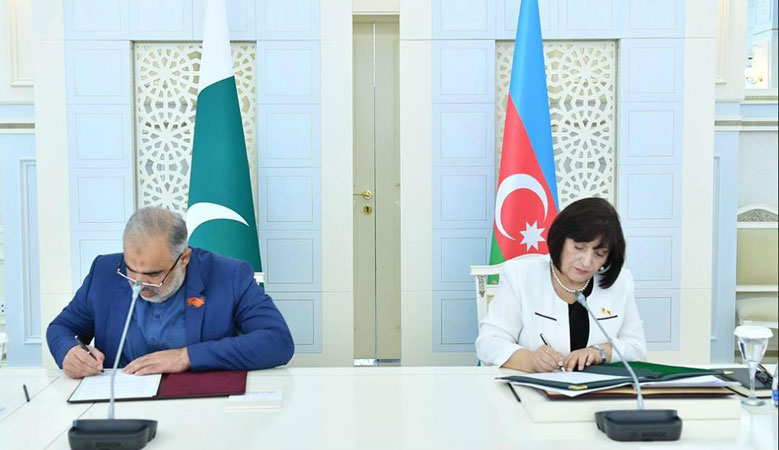 Speaker National Assembly of Pakistan Asad Qaiser vowed to foster bilateral parliamentary relations between Pakistan and Azerbaijan. He expressed these sentiments during a one-on-one meeting with Speaker of the Milli Majlis of Azerbaijan, Ms. Sahiba Gafarova in the bilateral component of his visit to Azerbaijan. The one-on-one meeting was followed by delegation level talks between parliamentary delegates of the two countries according to a message received from Baku.

Speaker National Assembly also extended gratitude to his counterpart in Milli Majlis for extending generous hospitality to Pakistani delegation during their stay in their country.

He also congratulated the Speaker, parliamentarians, government and people of Azerbaijan on liberating their territories from Armenian occupation. He also appreciated the role played by Azerbaijan in supporting the just cause of the people of Indian Illegally Occupied Jammu and Kashmir (IIOJ&K).

The Speaker National Assembly stressed upon the need to continue high-level parliamentary interactions to deepen cooperation and to accelerate follow-up on various initiatives by using platform parliamentary friendship groups.

The Speaker of the Milli Majlis of Azerbaijan appreciated Pakistan’s support to Azerbaijan during the Nagorno-Karabakh conflict. She also agreed to foster parliamentary cooperation between two brotherly countries for the benefit of people to countries.

Later, The Azeri Education Minister Emin Amrullayev called on Speaker National Assembly Asad Qaiser and the Pakistan parliamentary delegation. The Speaker and the Education Minister discussed various aspects of enhancing cooperation in education sector between both the countries. The Speaker said that a large number of Pakistani students were studying in Azeri Universities. He stressed the need to intensify students and faculty members exchanges between educational institutions of both the countries. The Education Minister appreciated the suggestions of the Speaker and said that would be considered and implemented. He said that massive scope exists for cooperation.

The Pakistan Parliamentary delegation will return to Pakistan on July 31 after attending the Trilateral Speakers Summit (Azerbaijan, Pakistan & Turkey) and undertaking a successful bilateral visit to the brotherly Republic of Azerbaijan.