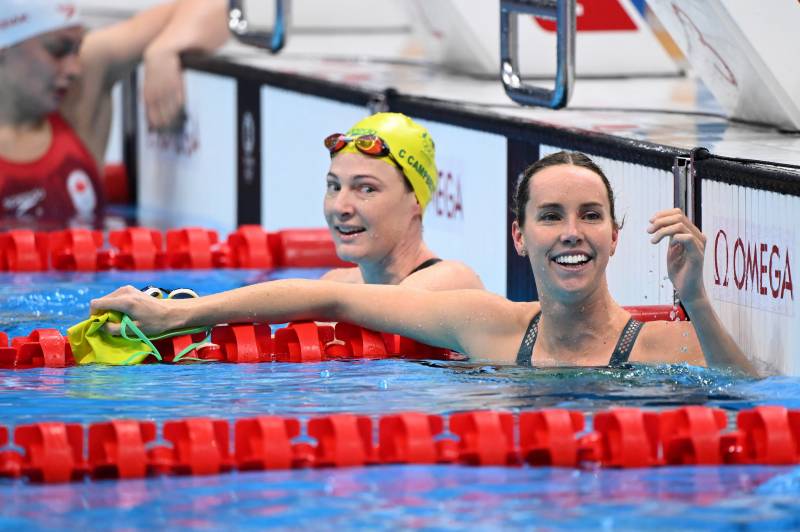 Australia’s McKeon claimed her fourth Tokyo medal when she hit the wall in a new Olympic record of 51.96 seconds, the second-fastest ever swum.

Hong Kong’s Siobhan Haughey (52.27) earned another silver after the 200m freestyle when she came second behind Australia’s Ariarne Titmus.

Australian veteran Cate Campbell was third in 52.52, bettering her disappointing sixth at the Rio Olympics when she was the hot favourite.

“I think it’ll probably take a while to sink in then the emotions will really come out,” said McKeon, who became only the second swimmer ever to dip below 52 seconds.

“I knew that I’ve been working hard and I was the best prepared.”

Just Sarah Sjostrom has gone faster, when she set the 51.71 world record at the Budapest world championships in 2017. The Swede finished sixth on Friday.

McKeon, 27, had signalled her intent in the heats, lowering the Olympic record, and she was always in charge of the final, turning first and accelerating to the line.

“I didn’t even look at my time,” she said. “I just went for the place because that’s what Olympics is about.”

She had already clinched gold and bronze in the 4×100 and 4×200 relays and came third in the 100m butterfly, with her four medals so far equalling her Rio tally.

While she was crowned the Tokyo sprint queen, Schoenmaker carved out her own slice of history with a sensational swim in the 200m breast final to claim gold.

It was the third new world record in the Tokyo pool, but the first individual record after Australia’s women in the 4x100m relay and China in the women’s 4x200m relay.

Lilly King was second to the South African, with her USA teammate and training partner Annie Lazor third.

Schoenmaker, who won silver in the 100m, had thrown down the gauntlet by going close to the record in the heats.

King went out fast and turned first at the halfway mark before Schoenmaker made her move to her reel her in.

“To be honest, I still feels so unreal,” she said, after becoming the first female South African to claim an Olympic swimming gold since 1996, when Penny Heyns swept the women’s 100 and 200 breaststroke.

“I think my emotions in the pool showed I was pretty shocked.

“When we got to the last turn, it was like, it’s everyone’s race now, that was the hard part because I saw she (King) was turning with me.”

Few events have been dominated by one swimmer like the 200m medley, which American legend Michael Phelps made his own, winning every Olympic title since Athens in 2004.

His retirement after five Olympic campaigns that yielded an astonishing 28 medals opened the door to someone else and China’s Wang Shun grabbed his chance.

He upset the field to win in 1min 55.00secs ahead of Britain’s Duncan Scott and Switzerland’s Jeremy Desplanches.

He touched in a new Olympic record time of 1min 53.27sec ahead of defending champion Ryan Murphy of the United States and Britain’s Luke Greenbank to shatter America’s long dominance of the event.

In semi-final action, Caeleb Dressel, targeting a third gold, led the charge into the 100m butterfly final with the third fastest time in history.

He dropped a 49.71 for a new Olympic record, just minutes after 200m champion Hungarian Kristof Milak had lowered the old mark to 50.31 in his heat.

Fresh from winning the 100m backstroke gold, Australian sensation Kaylee McKeown booked her place in the 200m back final in fifth behind team-mate Emily Seebohm who was quickest in 2:07.09.