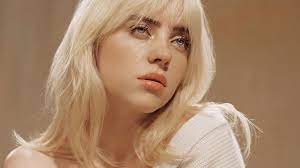 Billie Eilish revealed that she is happiest and thrilled after launching her new album.

After a few, namely single releases of songs My Future, Therefore I Am, Your Power, Lost Cause, and NDA, all of which were considered and listed in the top 40 of the US Billboard Hot 100, the teenage singer disclosed her thoughts. “Happier Than Ever”, my sophomore album, is finally out. I can’t even process it. This was the most fulfilling, most satisfying and profound experience I’ve ever had with my music,” Eilish wrote in a post, following the record’s release.
“Finneas and I were just on cloud 9 making this album I feel.. I love every song on this project so much it literally scares me thinking about putting it out into the world for anyone to listen to. I feel like crying.”

“I grew so much in the process of making this album and experienced so much self realization and self reflection. i wish i could go back and make this album all over again because it was some of the best nights in my life,” she continued, thanking her brother and collaborator. “You are my whole world and I couldn’t do any of this without you. anyway i’m so excited and nervous and blaaah… please take care of this project, it means the world to me. I CANT BELIEVE ITTTT,” she added more .